My friend and mentor, Steve Baker has passed away. He died at 11:11pm on Saturday Sept 16th, 2017 at his home in Illinois. His wife Julie, who was his faithful assistant throughout his career was by his side when he passed. Steve had been ill for quite a long time, but recently suffered several mini strokes which he did not recover from. 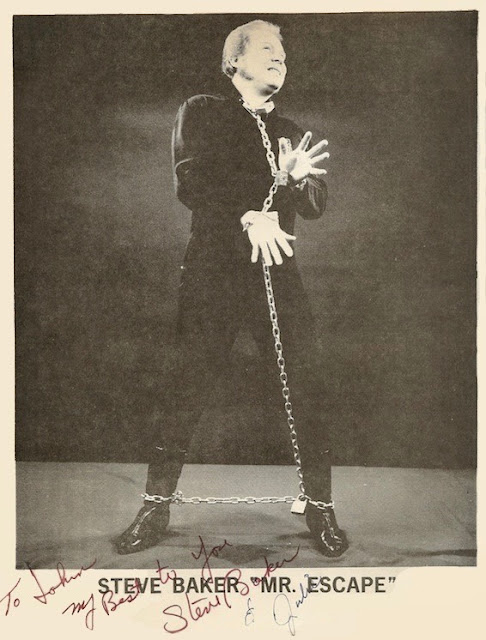 Steve Baker was one of the most prominent escape artists of the 1970s and '80s. He was also very much a part of my own coming to Houdini and magic. I first became aware of Steve from an article in the June 1976 Valley News. The headline read "Bettering Houdini's Stunts" and contained the following:

"I'm not as great as Houdini...I'm better," said the 37-year old Baker, who says he has broken all of Houdini's escape records.

"Houdini could pick most locks with a hairpin but today technology is 20 times more advanced," said Baker, adding with a smile that he is, therefore, 20 times better than Houdini.


I admit this did not sit well with the 11-year-old me. But on some level I understood that Steve was just engaging is some Houdini-like boasting for the press, which, in a way, was its own tribute to the great magician. The article promoted Steve's upcoming suspended straitjacket escape in front of Hollywood Roosevelt Hotel to mark the 50th Anniversary of Houdini's death and kickoff the IBM convention that year. The same paper later reported the escape (below). 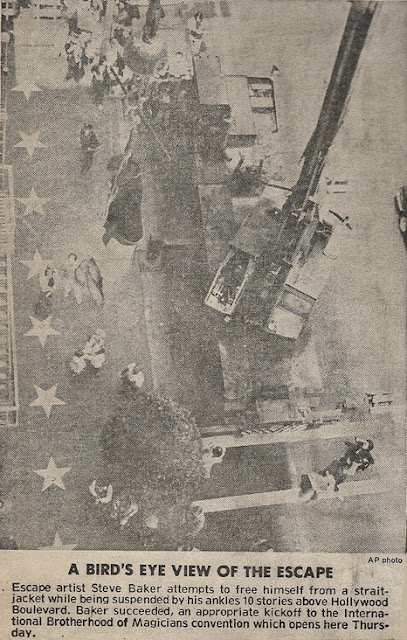 Shortly after this, Steve made an appearance at The Magic Emporium in Tarzana, one of the local magic shops I haunted in those days. Steve performed alongside his wife Julie on a small stage inside the store. This was the first "famous" magic personality I had ever seen in person. Unfortunately, I can't remember what kind of magic he did, but afterward I got a signed photo (above).

As I was leaving, I spotted Julie Baker in front of the store talking with a friend. I asked her to sign my photo as well. She seemed flattered and amused, saying assistants don't usually get asked for autographs, but she was happy to do so. I guess I felt that every Houdini had a Bess who was every bit as important to his story.

Another powerful memory was Steve's performance of the Water Torture Cell on Dick Clark's LIVE Wednesday in 1978. It's still the most harrowing version of the escape I've ever witnessed, and it gave me great respect for Steve's showmanship. 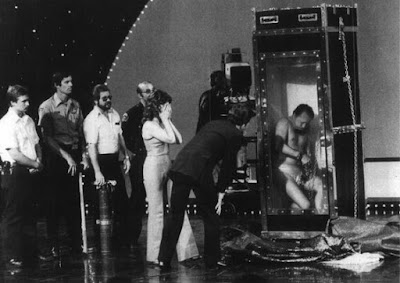 For a retrospective of Steve Baker's life and career, click over to The Magic Detective and read Dean's full post. And feel free to share your own memories of Steve in the comments below.