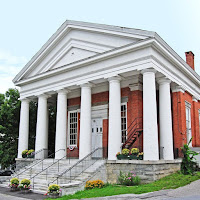 The historic Brandon Town Hall and Community Center in Brandon, Vermont will screen Houdini's The Man From Beyond and Terror Island this Saturday, September 16, from 7pm to 9pm. Both movies will include live musical accompaniment by Jeff Rapsis, a New Hampshire-based performer regarded as one of the nation's leading silent film musicians.

Admission is free, with donations welcome. All proceeds support ongoing restoration of the Town Hall, which dates from 1860.

Terror Island (1920) was the second feature Houdini made in Hollywood for Famous Players-Lasky Paramount. The Man From Beyond (1922) was the first film produced by the magician's own Houdini Picture Corporation.

Thanks to the Addison Independent.

Email ThisBlogThis!Share to TwitterShare to FacebookShare to Pinterest
Tags: Events, Screenings, Terror Island (1920), The Man From Beyond (1922)