The curious story of Houdini and Carleete 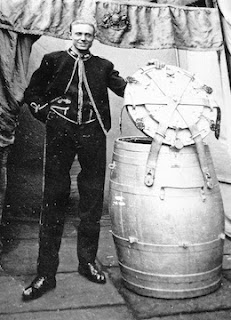 The 2013 blog Carleete tells the story of escape artist Harry Howes ("Carleete") who is said to have sold Houdini the idea for his famous Water Torture Cell.

The blog is a bit of a tangle of unclear dates and confused interpretations of the "water escape," but the basic story is that in 1911 Carleete toured Britain with an underwater barrel escape similar to Houdini's Milk Can (which Houdini invented in 1908). When Houdini was in Bradford, he paid Carleete to challenge him with his apparatus. When Houdini later introduced his Water Torture Cell, the idea that he had purchased his "water escape" from Carleete was born.

Of course, the USD and Carleete's barrel are hardly similar, but this claim dogged Houdini for years, and even gets a mention in Houdini The Untold Story.

The blog also includes a reprint of a terrific article by David De-Val from the April 1986 Escapism about Houdini's meeting with Carleete as recalled by his son Osmond (pictured above). It contains a wealth of interesting details -- including Houdini introducing himself as Mr. Harry Weiss -- and it offers one of the few eyewitness accounts of Houdini conspiring to set-up a challenge.

So click on over to Carleete and check out the post and David De-Val's must-read "Houdini & Carleete." You can also view a video on YouTube of Carleete's other son, Bayne Howes, telling an entirely different (barrel free) version of events.

Thanks to "Jack" of Houdini & Hardeen for the tip.