I honestly don't know where Houdini finds the time to do all the haunting he's credited with. But maybe that explains why he hasn't shown up at any official seance in 90 years. He's one busy spook!

Now according to America's Haunted Road Trip, Houdini haunts the famous McSorley’s Old Ale House in New York City...as a cat! This from the website:

According to Dr. Philip Ernest Schoenberg, tour guide for Ghosts of New York, whenever a cat is seen in the window of McSorley’s, Harry Houdini is present as the spirit inside the cat. Why Houdini, you ask? Dr. Schoenberg claims that the set of handcuffs secured to the footrail of the bar once belonged to Houdini.


We tackled the question of those handcuffs last year (links below). In short, while Houdini may have affixed handcuffs to the McSorley’s bar, the handcuffs there today are likely replacements. And as far as the cat goes...Houdini was really more of a dog person. 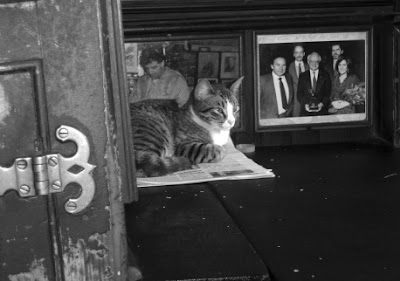