Dorothy Dietrich, Dick Brookz and Jane Mallison of Houdini Museum in Scranton attended the opening performance of Jennifer Berman's new play The Last Séance at the Hudson Guild Theater in New York on Monday. The play will run for two more performances on September 29 and October 1st. As you'll read in their guest review below, this is one not to be missed!

If you are within range of New York City, run don’t walk to see Jennifer Berman’s new play The Last Séance at The Hudson Guild Theater as part of their New York Theater Festival. It is set against the backdrop of the early twentieth century. Harry Houdini and Sir Arthur Conan Doyle confront each other over the emerging, widespread and growing phenomenon of Spiritualism. While devoted follower Doyle embraces the ability to contact and talk to the dead, Houdini is an anti-Spiritualist crusader.

Almost everything about this production goes beyond expectation. At the very top of the list is the lead Justin Chevalier, who plays Houdini, and is as good as it gets. Good looking and reminiscent of Houdini, short of statue, but tall in presence he exudes the kind of confidence one would imagine of the legendary superstar.

There are four other actors in the presentation, Jim Haines, who plays Doyle, has a large build that is physically larger than Houdini, but clearly not of the intellect of Houdini, though the part is written in a positive and intelligent manner, not cartoon like which would be the easy way to go.

The other three actors play multiple parts in the show. Isabel Schnall plays Lady Doyle and Margery (in a blond wig). As Lady Doyle, she sometimes is a little laid back and not always up front enough, but still very good and winsome. She totally changes as Margery being very sexy, brash and up front. Megan Ghorashy plays Bessie Houdini and spiritualist Eusapia Palladinio. Two widely different characters that she plays well, once you can in your mind make the transition.

Last but not least is Michael Fidalgo who plays 5 or 6 characters that by the end blend into one. Doyle’s son, Sir Oliver Cabot Lodge, Pheneas, Hereward Carrington, and and Margery’s husband, the enigmatic Dr. Crandon.

This show richly deserves a much wider showing, which in our minds could even extend to Broadway.


CLICK HERE for tickets to The Last Séance. For more information visit the website for The New York Theater Festival. 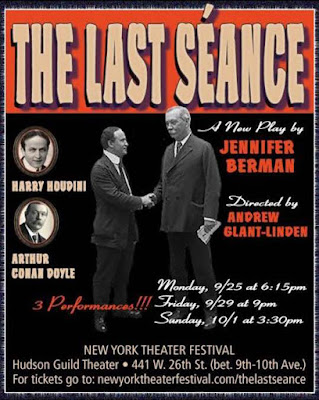