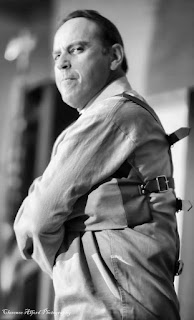 Duffy Hudson will bring his acclaimed Houdini one-man show to the German American Heritage Center in Davenport, Iowa, this Saturday, Sept. 23 at 2:00pm. The performance is part of the museum's "Houdini: The Magic and Mystery" exhibition which runs through November 4.

Duffy Hudson has done one-man shows as Albert Einstein, Edgar Allan Poe, and George Burns. In a profile at QCOnline, the actor explained how he decided to portray Houdini as his next subject:

"I was performing Poe for 500 middle-schoolers once, I was doing a Q & A, asking what character I should do next, and I put out 10 names. When I hit Houdini, they started screaming."

Visit the German American Heritage Center's website for more information on this and their "Houdini: The Magic and Mystery" exhibition. You can follow Duffy Hudson on Facebook.