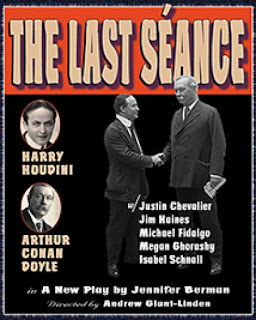 Against the backdrop of the early twentieth century, HARRY HOUDINI and ARTHUR CONAN DOYLE confront each other over the emerging phenomenon of Spiritualism. While devoted follower DOYLE embraces the ability to talk to the dead, HOUDINI becomes an anti-Spiritualist crusader. Can their friendship survive as the forces and faiths of this world, and the next, conspire to pull them apart?


For more information and to purchase tickets visit The New York Theater Festival.

Houdini and Doyle have certainly been popular with playwrights over the past few years. Below are links to a few other Houdini/Doyle stage adventures.

Thanks to our friends at the Houdini Museum in Scranton for the alert.