Houdini muscles in on Blackstone auction 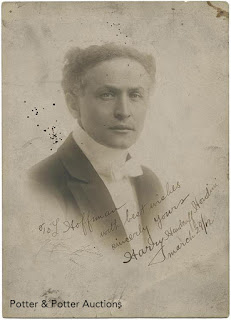 Potter & Potter's latest auction may have been devoted to Harry Blackstone, but just as in life, his chief rival Harry Houdini was there to try and steal his thunder!

The Blackstone auction include several nice Houdini lots, including the remarkable signed cabinet photo seen on the right ($11,685), Houdini's "Handcuff King Breaker" Lilly Irons ($22,140), and a file of papers related to Houdini's formal complaint against Blackstone for performing his Overboard Box escape ($4,920). The complaint resulted in Blackstone's expulsion from the S.A.M, and the file includes what's described as his "biting and anti-Semitic-laced four-page response", including this choice quote:

"...this chosen son of the great Patriarch, seems to be hankering for the limelight constantly, and not satisfied with being the ‘Handcuff King’, a motion picture idol, and a sometime headliner, will still stoop to the old time worn stunt of his kind to cry ‘Thief’, when he never had an original trick in his whole career…"


But Blackstone did pretty well himself today. Many of his lots reached Houdini-like prices, including $46,740 for a performance-worn tuxedo.

Potter & Potter's next "Winter Magic Auction" will be December 16 and will include "a selection of escape artist-related items, including handcuffs, locks, keys, and memorabilia."