Terror at the Hot Springs

One of the highlights of Houdini's Terror Island is the underwater photography, especially the scene in which Houdini opens a safe, freeing a trapped Lila Lee. While scenes on the surface were all shot on scenic Catalina Island, the underwater action was filmed 60 miles east of Los Angeles in Riverside, CA.

For a time, it was thought that Houdini and director James Cruze filmed their underwater action in the swimming pool of the famous Riverside Mission Inn, where Houdini and the crew stayed during the location shoot. But the Mission Inn pool did not exist until the 1940s (installed to compete with the resorts of nearby Palm Springs). So where were the scenes shot?

Mission Inn historian Joan H. Hall published the answer in her 1996 book, Through The Doors of the Mission Inn. The scenes were shot a mile from the hotel at the La Elliotta Springs Plunge.

La Elliotta Springs was the brainchild of developer W.E. Elliott, who in 1896 opened a public "plunge" (swimming pool) at the sight of a natural sulfuric spring. The flow of water was so great that a complete change of water was made each night. The "anti-germ water" became popular for its supposed health benefits, and the size of the pool made it a popular location for silent film production, including Buster Keaton's The Navigator.

Houdini and the Terror Island crew arrived in early November 1919 to film their underwater action in the Elliotta Plunge. Scenes included the aforementioned safe sequence, as well as Houdini fighting a diver and his transitions in and out of his submarine. While staying at the Mission Inn, the crew experienced a sharp earthquake on November 4. Near the end of their stay, Mary Pickford and her brother Jack arrived at the Inn following a lengthy shoot in the San Jacinto Mountains.

The local Riverside Press reported that the Houdini movie was being filmed "in secret" and would be called "Deep Sea Loot." This led Joan Hall to say in her book that the movie was never completed. Of course, it was completed as Terror Island. (Curiously, the title "Deep Sea Loot" sometimes still shows up as a separate Houdini movie.)

In 1936, La Elliotta Springs changed hands and became known as "Heron's White Sulphur Springs" until it closed in 1952. It re-opened briefly in 1960 as "White Sulphur Springs," before closing permanently. But the empty pools and abandoned buildings remained on the site as late as 2015, as can be see the photo below from The Press-Enterprise. 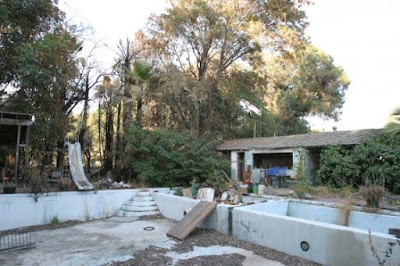 Last month I decided to drive out to Riverside to see for myself what remains of the Spring today. Unfortunately, not much. The pools have been filled in and all the trees removed, clearing a large empty lot. However, some of the foundations remain, as you can see in the photos I took below. The last tangible remains of Terror Island in Riverside. 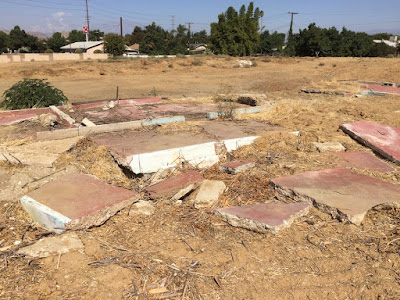 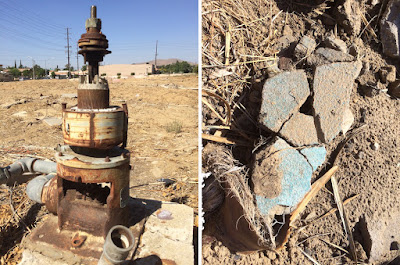 During my visit to Riverside I also made the short hop to the Mission Inn Hotel & Spa, which is still going strong as a tourist destination. I visited the Hotel Museum where the helpful staff directed me to the Hall book (I got a copy), and also showed me that Houdini is very much remembered as part of the hotel's history. Houdini's name appears in the self guided tour brochure, and the hotel bar has a drink named for him, the "Hand-Cuff Martini", which I had to sample...for research purposes! 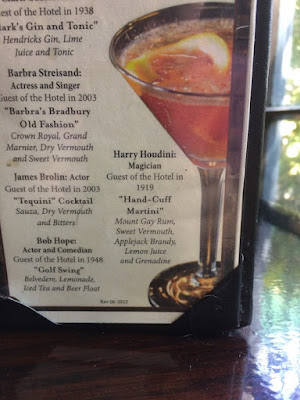 Now, not to get all Margery on you, but I could really feel Houdini in the hotel lobby and especially the old restaurant. I could see him holding court with James Cruze and the crew, feeling himself to be every bit a movie star and the conqueror of a new medium. The hotel also holds a certain fairy tale magic, and in 1919 it must have felt like a palace oasis in the middle of a nowhere. I couldn't help but think that if Houdini and Lila Lee ever got up to any romantic shenanigans (as rumored), it was in this place. But maybe that's the martini talking. 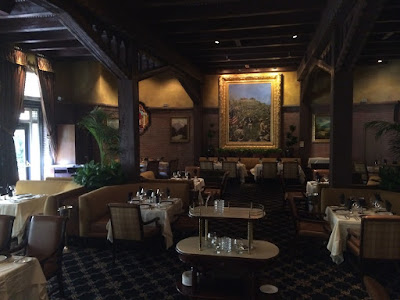 Speaking of Terror Island, I'm happy to be playing a part in what will be a major Terror Island event next year. No, we've not discovered a complete print (dang it), but it's still going to be pretty special. So stay tuned for more details and get ready for 2018 to be a year of Terror!

Thanks to Joe Notaro at Harry Houdini Circumstantial Evidence who first uncovered the Hall book and the information on Elliotta Springs.