Houdini (1953) released on DVD in Australia 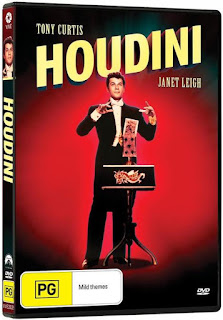 Madman Entertainment has released the classic Houdini (1953) on DVD in Australia. I'm not sure if this is the first release of this movie "down under", but it's the latest.

It appears Madman is only offering the movie on DVD and not also on Blu-ray, as Olive Films did for the last U.S. release in 2016.

You can purchase Houdini (1953) at Madman Entertainment.