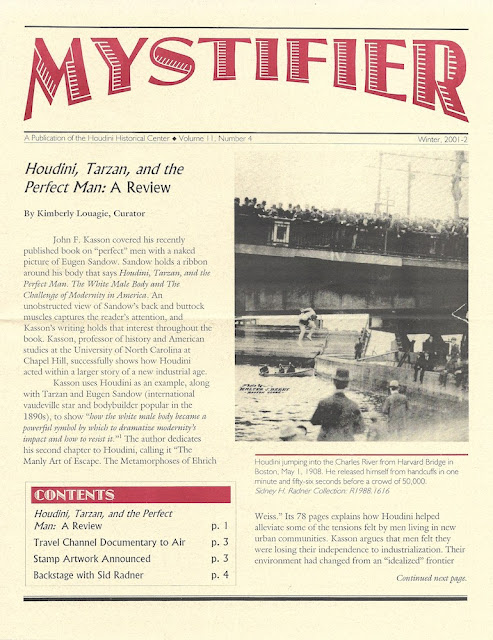 The last issue of Mystifier for 2001 eliminates the "Quarterly" denotation and announces itself as the "Winter 2001-2" issue. It begins with a review by HHC curator Kimberly Louagie of the new book Houdini, Tarzan, and the Perfect Man. The White Male Body and The Challenge of Modernity in America by John F. Kasson. It's a book she recommends as "a great example of how authors can peel away specific aspects of Houdini's life and interpret the magician in a larger historical context." Louagie nicely summarizes the chapter on Houdini as:

Its 78 pages explains how how Houdini helped alleviate some of the tensions felt by men living in new urban communities. Kasson argues that men felt they were losing their independence to industrialization. Their environment has changed from an idealized frontier society to one dominated by corporate capitalism. Kasson sees Houdini's appeal and subsequent fame as an expression of men's need to reclaim and redefine their manhood in a modern world.


The newsletter, which only runs 4 pages this time, continues with an alert for visitors to Appleton about construction along College Ave. It notes the Travel Channel documentary featuring the HHC is set to air April 15, 2002. It also reveals the artwork for the upcoming Houdini stamp as the famous 1911 lithograph, a copy of which the museum has on display from the Tom Boldt collection.

A sign of the times, Sid Radner begins his "Backstage" column discussing the impact of 9/11 on friends of the HHC, including Anna Crankshaw, the great granddaughter of Margery, who lives near Ground Zero and actually witnessed both planes fly into the towers. Sid notes that many regulars could not travel to the Official Houdini Seance that year at the Henry Ford Museum in Detroit. But one welcome new attendee was George Hardeen, the grandson of Theo.

Sid also amusingly points out that he contacted John Edwards, who was finding popularity with his Crossing Over program at this time, and invited him to attend. To no one's surprise Edwards never responded.

Sid continues with a rundown of publicity the seance received, including various radio interviews he gave and coverage in the Fort Worth Star-Telegram featuring Arthur Moses. Sid closes with news of the official announcement of the Houdini stamp ceremony to be held on July 3, 2002.