A week of Terror and SEX

In the run up to its wide release on April 18, Houdini's second Paramount feature, Terror Island, played an exclusive engagement at the Beacon and Modern theaters in Boston. These were showcase cinemas for Paramount-Arcraft films. But unlike the prestigious first run given The Grim Game in New York, Terror Island was consigned to the bottom half of double bill with a Louise Glaum vehicle called SEX. 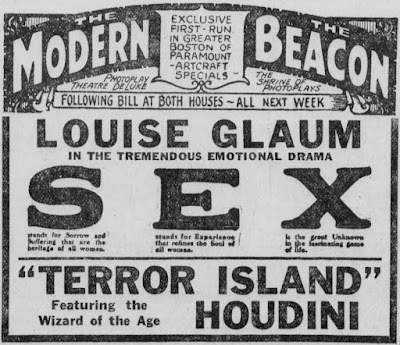 SEX was produced by J. Parker Read and directed by Fred Niblo. Star Louise Glaum was a popular "vamp" of the era. According to Wikipedia, it was a morality story on the evils of marital infidelity and the wild lifestyle of New York actors. But the film included scenes of seduction and debauchery that made it the subject of controversy, not to mention the racy title. It proved to be a big hit for Paramount.

Houdini was performing in England at the time of Terror Island's release, so his unavailability to make personal appearances, as he had done with The Master Mystery and The Grim Game, may have contributed to Terror Island playing second fiddle here. But it also may have foretold Paramount's cooling on Houdini as a box office draw, although Terror Island would do respectable business in wide release. It was no SEX! But who won in the long run?

According to the excellent Cinema Treasures website, the Modern Theatre stood at 523-25 Washington Street in Boston until 2009. The original Beacon Theatre stood at 47-53 Tremont Street. It was demolished in 1969. 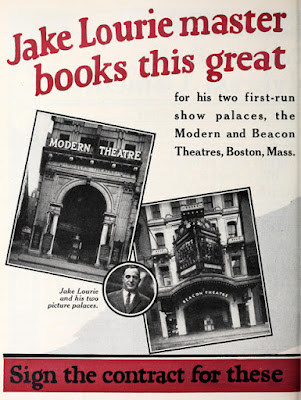