In 2010 Mike Elizalde's special effects house Spectral Motion launched their amazing "Magicians Series" of bronze busts. I discovered these by surprise at Monsterpalooza and blogged about them 10 years ago today. 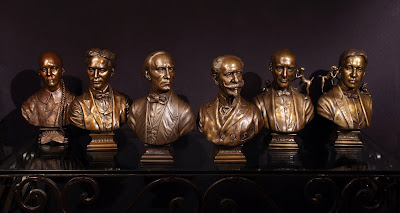 TEN YEAR UPDATE: Spectral Motion has thus far created busts of Houdini, Robert-Houdin, Kellar, Thurston, Chung Ling Soo, Alexander Herrmann, Adelaide Herrmann, Blackstone, Dante, and Cardini. All are on display at the Magic Castle. I've heard talk of mini busts and a new series of contemporary magicians. Mike Elizalde recently teased Ricky Jay on his Twitter. As for Houdini, I've never pulled the trigger on one of these (they are $2650), but I remain tempted and they still have a few in stock. My dream is they'll one day do a second Houdini bust at his older "Master Mystifier" age.