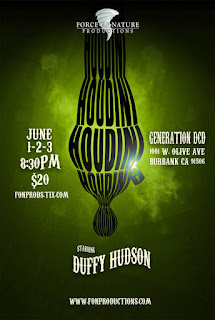 Last night I had the great pleasure of seeing Duffy Hudson's acclaimed Houdini one man show at the Generation DCD Studio in Burbank, CA. This is a three-night engagement with the final show tonight (June 3).

I saw Duffy do one of his very performances of the show in 2016 in South Pasadena. As good as that was, I'm excited to see that he's continued to improve it and evolve. I especially like that he now takes on Houdini's physicality, wearing a wig and a padded period tuxedo that gives him Houdini's distinctive stance. He's also added more magic (his Needles is a knock out). Asking the audience to hold their breath along with him is a still a highlight (I made it just over a minute this time), as is his description of the Mirror Cuff challenge.

I was there last night with a contingent of "Houdini Nuts" (Duffy amusingly referenced the "scary front row" a few times during the performance). In the end we all agreed; Duffy Hudson is our new Houdini in the flesh! 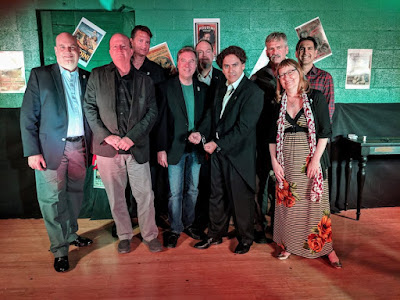 If you're in the L.A. area, I'd encourage you to catch the final performance of Houdini tonight at the Generation DCD Studio at 1001 W Olive Ave, Burbank, CA 91506. Tickets can be purchased at the door or online HERE.

Duffy will next be appearing as Houdini at the New York Historical Society on June 16 for the launch of Summer of Magic: Treasures from the David Copperfield Collection.

Thanks to "Nut" Brian Verkuylen for the group photo.