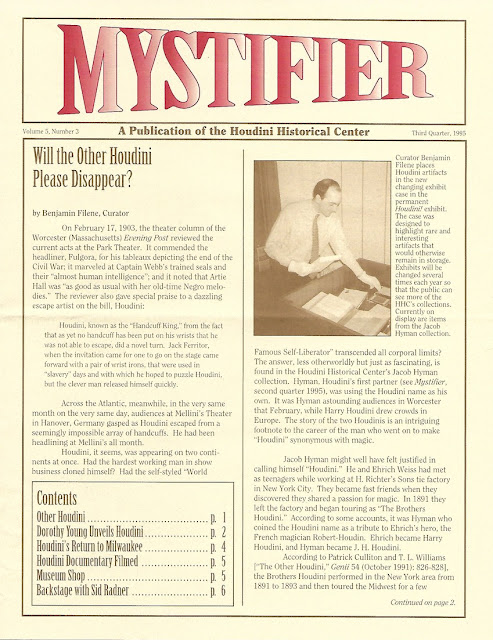 The Third Quarter 1995 Mystifier begins with an article by curator Benjamin Filene about Houdini's first partner Jacob Hyman and his continued use of the "Houdini" name during his own solo career. The matter came to a head in February 1903, as covered in the Springfield Republican:

The paper reported that Hyman, performing as "Houdini" had, as usual, challenged members of the audience to bring him handcuffs from which he would break free. When a pair was produced and locked onto his wrists, however, he could not extricate himself –– and for good reason. The handcuffs had been submitted by Dr. Leopold Weiss, Harry Houdini's brother. Weiss and his lawyer had come from New York expressly to foil Hyman. The Republican reported that Leopold "is said to have threatened to follow [Hyman] and bring him unopenable handcuffs until he drops the name Houdini."


The newsletter continues with an article about Dorothy Young's appearance at the 57th Houdini Club of Wisconsin Convention, held that year in Appleton. It also includes a very nice photo of Houdini with Dorothy and his other females assistants in 1925 (one that I've not seen reproduced elsewhere).

Wisconsin researcher Larry Wilden returns with "sequel" to his terrific look at Houdini in Milwaukee from First Quarter '95 issue. This time Larry covers Houdini's appearances in the city in 1912 and 1923. But he also includes a terrific gem about Houdini's boyhood from a 1912 interview:


During his engagement, Houdini was the darling of the press, granting numerous interviews, and conducting tours of his boyhood haunts. He told reporters about stealing eggs with his brother Theo and cooking them over a makeshift fire on the roof of the Plankinton House hotel. He also recalled selling issues of the Milwaukee Sentinel featuring stories of the disastrous Newhall House fire in 1883.


A report on the production of a new Houdini documentary by Gene M. Gamache and Coyote Pictures follows. The crew came to Appleton to interview Dorothy Young. The Museum shop also announces a new "Free Houdini" puzzle created by the The Magic Box Company, and a Houdini Historical Center watch.

Sid opens his "Backstage" column reviewing the Houdini Club of Wisconsin Convention. He also shares an item from Variety about Ray Stark's big budget Houdini movie beginning production in Spring 1996. This news was submitted by yours truly, and Sid adds:

John, who has an insider's view of movie making, cautions that "all news of a Houdini movie must be taken with a grain of salt. I've been disappointed in the past." [And I was again.]


Sid then announces that the Official Houdini Seance will be held in Holyoke inside the very building that once housed a police station where Houdini broke out of manacles in 1895. (Sid always characterized this as Houdini's very first police challenge, but it was not.) He wraps up with the news that Ken Silverman is finishing up his biography with an eye towards a Fall 1996 release. "It will be the most definitive book ever written about Houdini, with lots of previously unknown information." True enough!