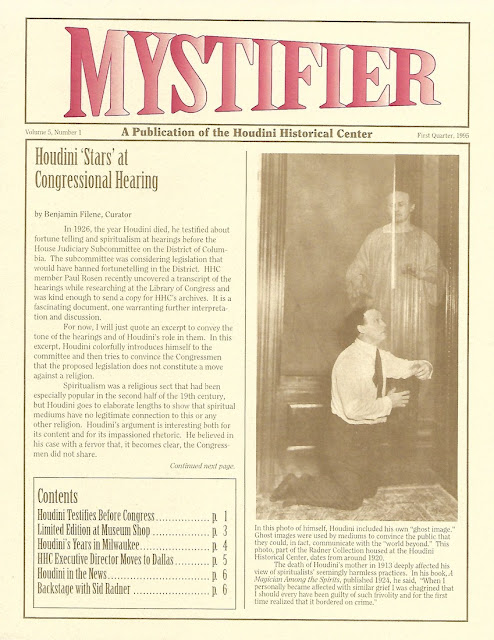 The First Quarter 1995 Mystifier begins with an excerpt from the transcript of Houdini's 1926 Congressional testimony. HHC curator Benjamin Filene credits the transcript having been uncovered by HHC member Paul Rosen at the Library of Congress. It's interesting to see that Houdini cites Sarah Winchester of Winchester Mystery House fame in his list of people he believes were ruined by their devotion to Spiritualism. Houdini states:


In my 35 years I have never seen one genuine medium. Millions of dollars are stolen every year in America, and the Government have never paid any attention to it, because they look upon it as a religion. Sara Winchester spent $5,000,000; the celebrated judge of New York, Edmonds, spent all his fortune; Professor Hare, of Yale College, heard voices and saw forms, and stated a lead pencil stood upright on the table and wrote messages, and answered questions.


Wisconsin researcher and writer Larry Widen contributes a very well researched article called "Houdini in Milwaukee: The Forgotten Years." I was impressed that Widen mentions Harry and Bessie's 1897 tour as part of "Rogers Orpheum Stars", which is rarely mentioned in biographies. But most intriguing is his paragraph about the magic show young Ehrich Weiss witnessed in Milwaukee:

One evening in 1895, an elegantly garbed gentleman was working on stage at a Milwaukee dime museum. Billed as "The Bloodless Vivisectionist" he produced a series of gleaming, wicked-looking knives and proceeded to dismember a living human being before the audience's eyes. With a flourish, the man then replaced his victims limbs and head, apparently none the worse for wear. Eleven-year-old Ehrich Weiss sat spellbound through this performance. He had never seen magic combined with this caliber of showmanship. Houdini later cited the vivisectionist's performance in Milwaukee as a primary inspiration for becoming a magician.


Notice he does not identify the performer, and that he locates it in a Dime Museum. This is very different from the accepted story of Houdini's father taking him to see the celebrated Dr. Lynn at the local Opera House. In his notes, Widen lists a clipping for "Litt's Mammoth Dime Museum" in the Milwaukee Sentinel for February 22, 1885, which is presumably his source for this performer. This appears to corroborate the recent thinking that it was not Dr. Lynn that young Ehrich Weiss saw that day in Milwaukee.

The newsletter includes a museum shop update, announcing the availability of Benjilini on Houdini. It also notes that HHC Executive Director Donald Hoke has accepted a new position in Dallas.

Sid Radner devotes his "Backstage" column to his recent trip to Las Vegas, where he reports that he saw Dixie Dooley and the Harry Blackstone Jr. show (Siegfried & Roy and Lance Burton's were dark during the Christmas season). He also makes a pitch for artifact donations to the HHC.

Sid finishes with "Houdini in the News" in which he reports that Wisconsin Public Television will feature the HHC and the Harry Houdini Assembly of the Society of Young Magicians on the children's program Get Real. He says that a reproduction Houdini bust and Water Torture Cell poster will appear as props in upcoming episodes of The Bold and the Beautiful set inside Houdini's house.

Sid also has a clever new sign-off: "Until next time, keep opening those locks."