A poster for The Master Mystery episode 11 sold at an eMoviePosters.com auction earlier this month for $15,831. The auction description contained some interesting information about the poster's provenance. 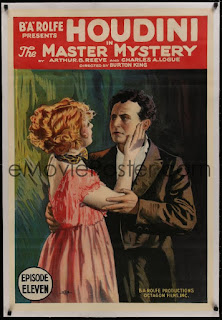 This movie was Harry Houdini's very first movie, and it was his only serial, and it had "The Automaton", the very first robot in a movie. So it is certainly a very historic movie. Posters from it were unknown until around 35 years ago, when the son of the man who produced the movie surfaced, and he had one one-sheet from each of the fifteen chapters! Those were quickly sold, and over the years, a very few of them have returned to auction (we have auctioned four different chapters).


In 2016 an Episode 3 poster sold for $28,080. The value of Master Mystery posters can vary depending on whether the artwork features escape imagery or The Automaton.

In 2013 eMoviePosters auctioned a one-sheet from The Grim Game for a remarkable $67,166. This is the first Houdini movie poster the site has auctioned since.