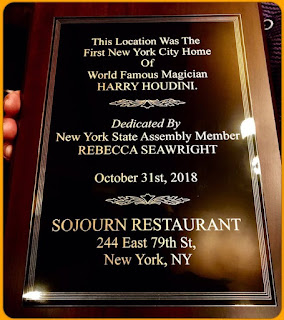 The New York Post reports that a historic plaque marking Houdini first New York home will be installed at 244 East 79th Street, the one-time location of Mrs. Loeffler's boarding house where the Weiss family lived in 1887. The plaque dedication was part of the Original Houdini Seance held at Sojourn Restaurant on Halloween.

A plaque was said to have been installed there in 2016. But when I went to Sojourn to have a look in July, the restaurant staff had no idea what I was talking about. So I'll believe it when I see it!

Nevertheless, it's one fine looking plaque.

UPDATE: According to Dick Brookz of the Houdini Museum in Scranton (who organize the Original Seance), the 2016 plaque was stolen.