If you couldn't make it to the screening of The Grim Game in Baltimore yesterday, know you'll have another chance to catch the film at the Weyauwega International Film Festival in Weyauwega, Wisconsin, on November 10th at 7:30pm. Below are details. 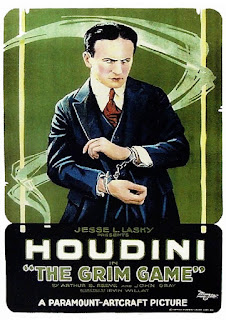 Houdini's long lost film from 1919, THE GRIM GAME, screens Saturday, November 10th at 7:30pm. Introduced by film historian Jack Rhodes and film preservationist Rick Schmidlin who restored the lost film in 2015. Houdini historian Tom Boldt will display some rare Houdini memorabilia and discuss Houdini’s upbringing in nearby Appleton, Wisconsin. There will also be an appearance by a very special mystery guest!


For more information and to buy tickets visit the WIFF website.