C. Michael Forsyth, author of 2015's The Adventure of the Spook House, is back with a new work of Houdini fiction: Houdini vs. Rasputin. 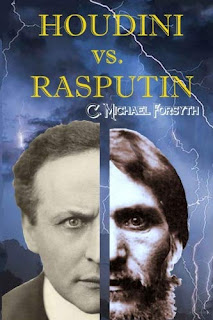 While performing before Tsar Nicholas II of Russia, the world’s greatest escape artist Harry Houdini becomes pitted against a formidable foe: Rasputin. A powerful mystic, Rasputin has made puppets of the Tsar and his wife Alexandra. To save the nation from ruin, a small band of patriots recruits Houdini to expose the imperial “spiritual advisor” as a charlatan.

The American magician’s daring and ingenuity are put to the test in an adventure that takes him from the grand palaces of St. Petersburg to the frigid wastelands of Siberia. Along the way, Houdini makes allies and enemies of a host of real-life figures, including the mischievous imp Princess Anastasia, the colossal former boxer and royal bodyguard Jim Hercules, the crossdressing conspirator Prince Yusupov and the sinister Black Sisters, practitioners of the occult who scheme to use Rasputin for their own ends.


You can purchase Houdini vs. Rasputin at Amazon.com and Amazon.co.uk.