Off to Houdini's Baltimore

I'm off to Baltimore where I'm very excited to be giving a talk on "Houdini in Hollywood" and screening The Grim Game at the Jewish Museum of Maryland on Sunday, November 5 at 1:00 PM. I'm also looking forward to seeing the museum's exhibition, Inescapable: The Life and Legacy of Harry Houdini. 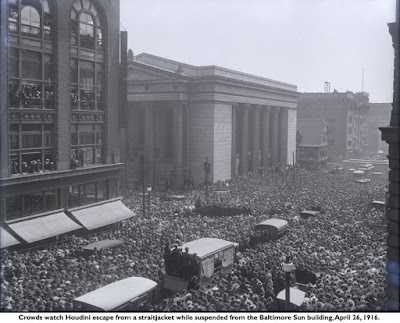 Baltimore was regular stop on Houdini's tours. In 1916 he performed a suspended straitjacket escape from the Sun building before a reported crowd of 50,000. It was also in Baltimore at the Maryland Theater that he debuted his "3 Shows in One" on August 31, 1925.

I don't have time to cover more of Houdini's Baltimore connections, so I will send you over to Dean Carnegie's The Magic Detective to read: Houdini In Baltimore 1916.

It's likely I will not be updating the blog until I'm home. But I'm hoping to see some of you at Sunday's event. You can find details at the JMM's website or the event page on Facebook.