The Society of American Magicians held their annual wand breaking ceremony at Houdini's grave this week. Magician and escape artist Dorothy Dietrich of the Houdini Museum in Scranton did the wand breaking honors this year. 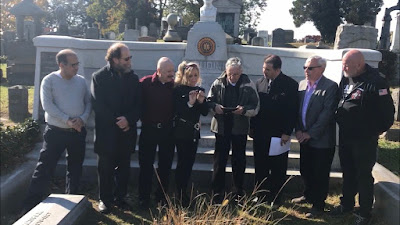 The wand breaking tradition began with Houdini's death in 1926. The S.A.M. has continued the ceremony every year since 1969. Houdini became president of the S.A.M. in 1917 and built it into the national organization it is today. The S.A.M. now looks after his gravesite.