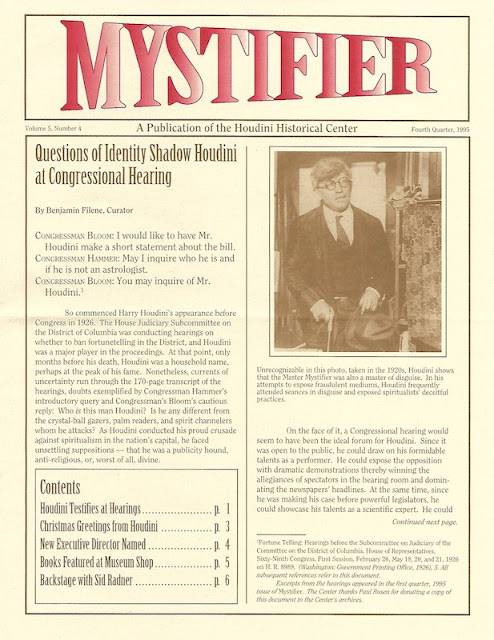 The Fourth Quarter 1995 Mystifier is made up largely of an article by curator Benjamin Filene about Houdini's 1926 Congressional testimony in support of a Bill outlawing Fortune Telling in the District of Columbia. The article includes excerpts and focuses on how the Congressmen continually questioned Houdini about his own "powers".

The issue of Houdini's supernatural abilities repeatedly derailed his efforts to expose spiritualistic frauds before the committee. Repeatedly he tried to demystify spiritualistic effects by showing that he himself could duplicate the illusions. The congressmen instead interpreted these demonstrations as evidence that, for better or worse, Houdini and the spiritualists were in the same camp after all.


So it appears Congress was just as ignorant and ineffectual then as they are today! There is one short quote from Houdini that I've not seen reprinted before which I really like:


The newsletter continues with a profile of the HHC's new director Steven M. Wilson. The museum shop announces the restocking of Kathy Cogger Salm's six book series for grade schoolers, Harry Houdini, An Appleton Original. They also note that copies of the new Houdini fiction Nevermore by William Hjortsberg are available, but "will only be sold to adults over 18 due to graphic violence and explicit sexual content." Some familiar names in the listing of news members are Don Bell and Roger Dreyer.

In his "Backstage" column, Sid Radner talks about Houdini in the news, including a syndicated story about how the management of Machpelah cemetery closed Houdini's grave to the annual wand breaking ceremony that year. The cemetery complained that the ceremony attracted too much news and vandalism. Instead, the ceremony was held on November 16, the Jewish calendar date of Houdini's death.

Sid then reports on The Official Houdini Séance, held that year in his own home town of Holyoke, Massachusetts, inside the building that once housed a police station where Houdini broke out of manacles on December 1, 1895. Sid always characterized this as Houdini's very first police station escape, but we now know that it wasn't. But it was a one of the first.

Sid concludes with the news that Ken Silverman spoke about Houdini at the Los Angeles Conference on Magic History that year.