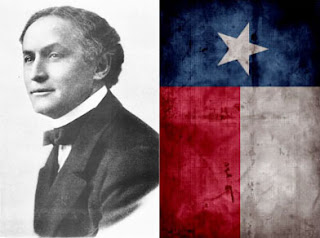 It was a 100 years ago this week that Houdini embarked on his first tour of Texas in 1916. The reason it took Houdini this long to appear in the Lone Star State was probably because Texas was not part of the Keith-Orpheum vaudeville circuit, on which Houdini was a headliner. Texas vaudeville was controlled by Karl Hoblitzelle and his Interstate Amusement Company. Hoblitzelle's theaters were called "Majestic." It was not typical for Houdini to appear on another circuit, but Texas was not a typical state!

Houdini kicked off his tour on January 10 at the Majestic Theater in Fort Worth. This was a popular Vaudeville house that sat 1500 and stood until 1967. To promote his appearance, Houdini performed a suspended straitjacket escape from the Star-Telegram offices at Throckmorton and 8th Street. Later in the week, he was bound and dragged down Fort Worth's Main Street behind a motorcycle ridden by daredevil Ormer Locklear who would later become a famous wing-walker. Houdini wore a hood and heavy protective overalls and freed himself before Locklear could get up to speed. Possibly the stunt felt a little anticlimactic as the papers appear to have not covered it.

Houdini then traveled to Dallas where on January 18 he performed a suspended straitjacket escape from the Dallas Morning News building at Commerce and Lamar. Later in the week, he faced a punishment suit challenge from Sheriff W. K. Reynolds.

Next came Houston. Houdini performed at the local Majestic (called the New Majestic) and on January 25 he again performed a suspended straitjacket escape from the Houston Chronicle building. This time he was raised to a height of 100 feet, twice as high as in Dallas and Fort Worth. While the papers praised his Water Torture Cell and challenge escapes (one from a sea bag nailed to the stage), there was one criticism. Houdini's popular Needles trick had recently been performed in Texas by two other magicians, and the papers noted:

He introduces the well known needle trick which has been worn thread bare this season on this circuit and trailing so close in the wake of Long Tack Sam this feature should be eliminated, as it cheapens the work of the great artist.


On the Majestic circuit it was customary for acts to perform a "Free Cabaret" on Thursday nights. At these shows, Houdini performed magic and also exposed tricks. (One wonders if these might have been spiritualistic in nature.) One of the tricks Houdini performed was the Jesse James Hanging Trick.

Houdini also gave a talk about his life to newsboys at the Emma R. Home and Club. His advice: "Be true to yourself, honor your parents and hew the line." 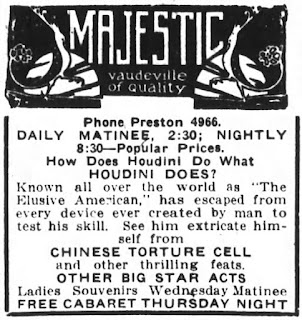 Note the mention of the Free Cabaret.

Houdini's next stop was in San Antonio where he played a Majestic Theater that only held 300. Perhaps this smaller theater could not accommodate the Water Torture Cell, for the papers did not mention the famous escape. They instead reported that Houdini freed himself from a straitjacket and accepted challenges.

On an unusually chilly day, Houdini performed a suspended straitjacket escape from The Express building at the corner of Navarro and Crocket before 12,000 spectators, the largest crowd of his Texas tour. The Express did an especially good job of infusing the stunt with a sense of life and death danger:

There are two veins in Houdini's forehead, one in each temple and which feed the blood to the brain. Should one burst under the tremendous strain of dangling head down so many feet in the air and so many minutes, Houdini would become a helpless paralytic beyond aid of medical science. A slow, certain death would be his position.


Houdini's final stop was the state capitol of Austin. Houdini played a newly opened Majestic Theater, which still stands today as the Paramount. (The theater recently featured a Houdini hologram.) On February 10, he escaped from a straitjacket suspended from the fifth floor of the Littlefield Building at 6th and Congress. That same day he faced challenges at matinee and evening performances. During his Austin engagement, Houdini stayed at the famous Driskill Hotel. 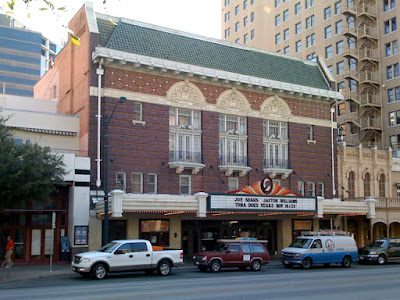 Houdini's Majestic is today the Paramount. 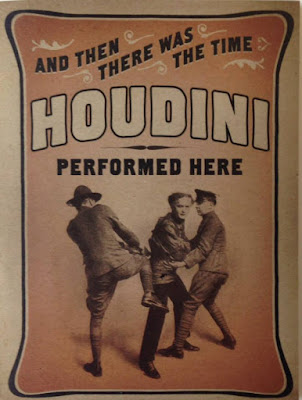 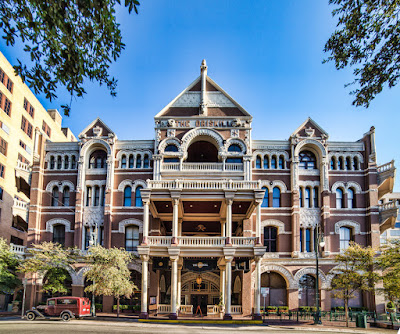 The Driskill where Houdini stayed in 1916.

So popular and plentiful were Houdini's Austin challenges that his engagement was extended. Because the rest of the company had moved on to Arkansas, the Majestic's bill was filled out with movies during his extended run. Houdini did turn down a challenge to escape from the Travis County Jail, saying that jail breaking for him was "old stuff."

Houdini's final challenge came from students at the University of Texas in Austin who nailed him inside a packing crate. Today the University is home to the Harry Ransom Center which houses one of the largest and most important Houdini archives in the world.

Of his time in Texas, Houdini told a reporter:

"I am glad to have come to Texas. It has been a revelation and a tonic. I like your atmosphere and I like your people. There is a broad civilization down here which seems to be characteristic of the State. That greater things will follow down here goes without saying. They will come just as surely as death and taxes."


Houdini would tour Texas again in October-November of 1923. His made his final visit with his anti-spiritualism lecture for one week in October 1924. 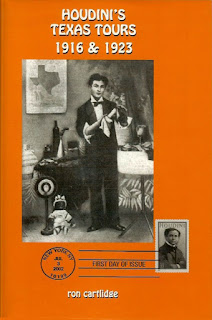 For a definitive look at Houdini's appearances in the Lone Star State, a must read is Houdini's Texas Tours 1916 & 1923 by Ron Cartlidge. Ron followed up with Houdini and the Ku Klux Klan (2005) and Houdini’s Final Texas Tour (2010).