Our good friend John C. Hinson has sent over several newspaper clippings from the 1930s that were collected by Bess Houdini and Edward Saint. They provide a nice look at some lesser-known aspects of Bessie's post Harry life. First and foremost, her love of Satan! 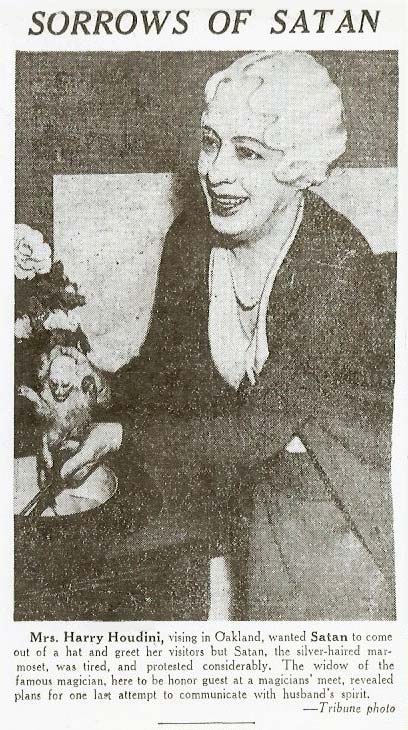 Mrs. Houdini revealed all this when she arrived at the St. Mark Hotel, where last night she was honor guest at a joint meeting of the Oakland Magic Circle and the Society of American Magicians, San Francisco. She arrived by auto from Seattle, where she was feted at a convention of magicians, with Edward Saint, her manager and her husband's biographer, and Satan, a 10-year-old silver hued marmoset who weighs seven ounces and chirps like a canary with a cold when he is irritated.


This article appeared in the Oakland Tribune on Sunday, July 19, 1936, and in it Bess announced her intention to hold "one last" Houdini seance that Halloween "in the open air so as many people as possible can be present." That idea grew into the famous Final Houdini Seance on the roof of the Hollywood Knickerbocker Hotel.

The Oakland Post-Enquirer also picked up the story of Bessie's visit and seance plans, and once again Satan stole the show. 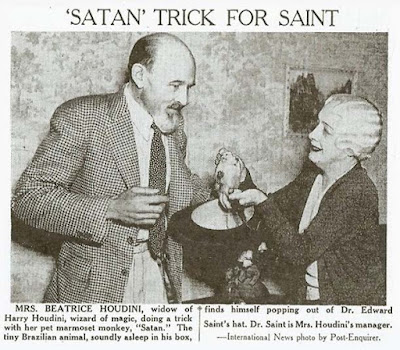 The Post-Enquirer story contains an additional intriguing tidbit. Bess says she plans to hold the final Houdini seance in California, not only because it is now her home, but because "Houdini expressed a last wish on his death-bed in Detroit to come to California to live."

One wonders if that is true, or if Bess was just playing to the home crowd. Although Houdini did once name Hollywood as his favorite "holiday destination," so...