Here's an image sent to me by friend and formidable magic historian Diego Domingo. He says, "The daughter of vaudeville and radio crystal gazer, Mel-Roy, gave me some photos, among them was this one, which on the back read, 'Mrs. Houdini’s home, 1936.' In the photo is Mrs. Mel-Roy, holding her daughter Carolyn." 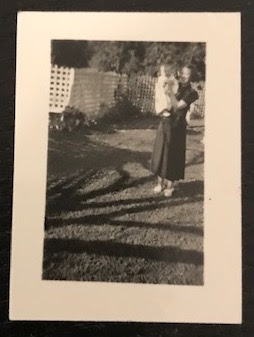 Bess and Edward Saint moved around quite a bit during their Hollywood years, but it's likely this is the backyard of 1616 N. Curson, which they did occupy in 1936. The house is still standing today.