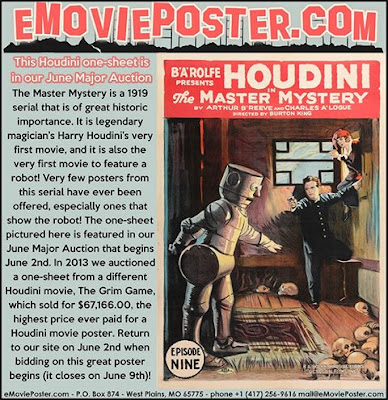 A poster for Houdini's The Master Mystery Episode 9 will be auction via eMoviePoster next month. The auction goes live June 2 and ends on June 9. Auctioneer Bruce Hershenson tells me:

"Posters from [The Master Mystery] were unknown until around 35 years ago, when the son of the man who produced the movie surfaced, and he had one one-sheet from each of the fifteen chapters! Those were quickly sold, and over the years, a very few of them have returned to auction (we have auctioned four different chapters, and we were later re-consigned two of them, so we have auctioned six posters, but two of them were reruns of previous sales, and each was the only example of that poster we had ever auctioned). Now, we are auctioning a chapter that we have never auctioned before, and this one shows Houdini pointing a gun at the Automaton, in a room filled with human skulls!"


Click here for a preview of all the posters coming to the June 2 auction. I will update with a link to The Master Mystery auction when it goes live.