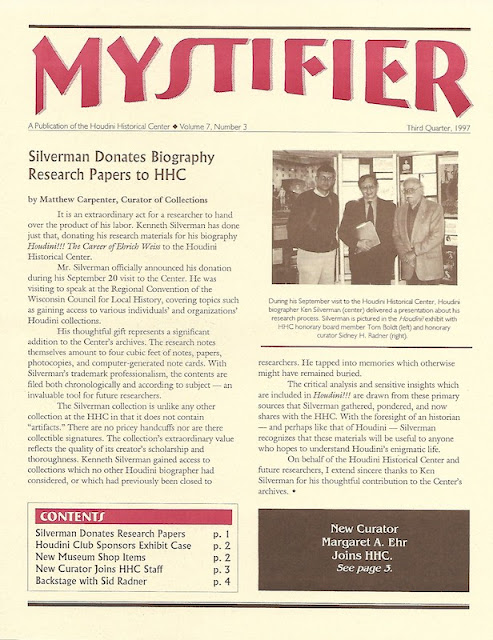 The Third Quarter 1997 Mystifier kicks off with the news that author Kenneth Silverman has donated all his research papers from his seminal biography Houdini!!! The Career of Ehrich Weiss to the HHC.

His thoughtful gift represents a significant addition to the Center's archives. The research notes themselves amount to four cubic feet of notes, papers, photocopies, and computer generated note cards. With Silverman's trademark professionalism, the contents are filed both chronologically and according to subject – and invaluable tool for future researchers.


The newsletter only runs 4 pages this time. As with the previous issue, it is largely taken up with HHC business. Margaret A. Ehr is announced as the new HHC Curator. It notes the Houdini Club of Wisconsin has made a donation of $250 to support a special special Changing display case. Once again members are reminded of the Museum Shop exclusives, including the previously announced phone cards and a new HHC t-shirt.


Sid Radner devotes his entire "Backstage" column to a review of the Goodspeed Opera House's new Houdini musical. (Include with the newsletter is a flyer for the production.) Says Sid:

In addition to the great artistic talent that went into the production, a great deal of magic expertise was involved. Audiences who see the musical will see some of Houdini's most famous escapes performed on stage, including the Upside Down Straitjacket Escape, the Metamorphosis, and the Chinese Water Torture Cell.


He concludes by announcing that the Official Houdini Seance will be held on the stage of the Goodspeed Opera House following its performance of Houdini on October 30th.