Houdini and the New York critics 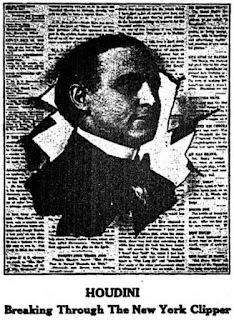 Houdini had no shortage of good reviews. These tell us he was a popular performer, but we know that. It's those rare bad reviews--or at least reviews that offer some kind of candid assessment--that can be much more interesting and give us a better sense of Houdini at a time and place.

Recently I discovered a review of Houdini at Keith & Proctors 23rd Street Theater in New York City. It includes a paragraph that articulates sometime I've been sensing in my research. It took Houdini several years to win over audiences in his home town of New York. The review, which appeared in the May 18, 1907 Variety, states:

New York is a big town, and while Houdini is probably outside this city the best drawing card in vaudeville, he does not largely attract here through inability to secure the press work the smaller towns supply. In his line of work, however, Houdini is such and inventive genius, with unequaled daring, that it is a safe to say he will yet startle the Metropolis and have himself talked about as happens in other localities.

Houdini appears to have finally broken through the following year by offering New York audiences his Milk Can escape. A review in the April 4, 1908 Variety opens with:

Monday night settled conclusively the interesting question whether Harry Houdini would prove the same sort of success before a very sophisticated metropolitan audience that he has been on the road. A capacity house at Hammerstein's was held in at the tall end of the show as they seldom are by a closing act, and substantial applause at the finish clinched a real hit for the handcuff expert.

But there were still those New York critics who were not sold on Houdini. This review of Houdini's first appearance at the prestigious Palace Theater is from the October 24, 1914 issue of Variety.

One of the poorest night houses the Palace has had in month Monday evening didn't speak any too well for the drawing powers of either Houdini, who headlined, or Rosie Dolly and Martin Brown, the latter couple making their vaudeville debut as a team. Houdini played Hammerstein's for a month during the summer. It may have had its effect upon his powers of attraction so near by, although the truth probably remains Houdini's is not the sort of turn the Palace clientele prefers. It is not partial to freak acts.

That last line is so stinging, one wonders if this reporter had some personal grudge against Houdini. But Houdini did play only a single week, which was untypical for him, so this does suggest he didn't wow the Palace crowds. This must have been especially embarrassing for him as the Palace was the creation of Martin Beck.

Undeterred, Houdini returned to the Palace in August of 1915. Of this engagement the same Variety reviewer only sniffled:

The Palace program this week is running jerkily, but any kind of show fits the weather. Besides the Mayhew-Taylor couple there were Lopokova (New Acts) and Houdini as extra attractions, the latter closing the first part with his "Submerged Box Mystery" so often done at Hammerstein's.

This time Houdini was clearly a success. The Palace extended him for a second week, then tried for a third. (A commitment at Henderson's in Coney Island prevented him from accepting.)

From this point on, Houdini received uniformly good reviews from the New York critics. But they still sometimes offered up constructive criticism, such as the following Variety review of Houdini at the Hippodrome from January 14, 1925 (excerpts):

Houdini on the vaudeville stage "doing an act" as he is doing this week is to see Houdini wasting his time. He doesn't need magic, an escape or an illusion act for vaudeville––he has other stuff. Nothing could be better than his spiritualism expose with a Houdini lecture upon it, to be followed the same or the following week with the exposes worked out.

That's Houdini's forte in this day. The straitjacket, the substitution, even the needle trick, with the handcuffs forgotten––they all look like baby play for this Houdini.

In short, Houdini has outgrown the act that made him.

Tell 'em about the spirits, Harry, and tell 'em also, Harry, the only spirits raising the devil nowadays are those in bum booze.

Make up two acts for two weeks, one of spiritualism and its nots and the other the illustrations. That's the stuff for this Houdini, for he can do it inoffensively: it will bring a new crowd to every vaudeville house Houdini gives them in and properly exploited with those two acts Houdini can be made the best drawing card any vaudeville ever has had. He may be that anyway.


Houdini did take this reviewer's advice, working up a 41 minute act of almost pure spiritualism exposures for the remainder of his Hippodrome engagement. But the above review is so full of lavish praise--"Houdini is an intellectual, and besides that, among showmen he is the peer of all actor-showmen anywhere"-- I'm wondering if Houdini didn't have a hand in writing it expressly to set up his spiritualism transition.

I could not find a review of Houdini's "3 Shows in One" when it played on Broadway, but Variety did review it out of town in Providence, R.I. in their December 2, 1925 issue:

In all, Houdini, with his captivating and compelling stage personality, his vast knowledge and incomparable technique, shaded any exhibit of its class without going in for a huge or blinding production. The sets were pretty and artistic, but not of the circus type, running to drops and drapes, mostly.

The show is good enough to attempt Broadway, though Houdini is not believed to have that in mind for the present. In New York the spiritualism could go further as was the first intent of the venture.

In any event, it is still a certainly that Houdini has all his gifts and faculties for mystifying and amusing, besides doing probably a great human work for decency and honestly. He has given new dignity to the too-often maligned trade of "magician" and has helped bring the profession to a new estate of dignity and standing.

This appears to have been the last review of Houdini in Variety.