The Grim Game is a hit on Terror Island 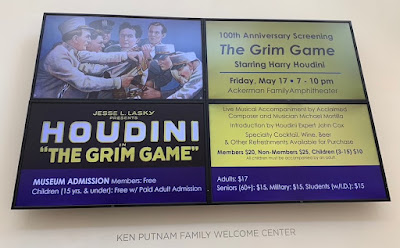 The Catalina Island Museum hosted a 100th Anniversary screening of Houdini's The Grim Game on Friday. The event was a huge success, drawing a standing room only crowd.

The original plan was to screen the movie in the museum's outdoor amphitheater, where last year they screened the Tony Curtis Houdini movie. However, the weather forecast was ominous, so the screening was moved indoors to the nearby Overlook Hall.

As it turned out, the weather was perfect (perfect enough for me to get quite a sunburn), but the change of venue proved to be inspired. The historic 1929 hall created an old world atmosphere and was the perfect setting for a silent film. The occasion was also enhanced by many audience members coming dressed in authentic period clothing (this was the weekend of the annual Art Deco Society Ball). The building also happens to sit across from the Hotel Catalina where the Terror Island crew stayed in 1919 (and where the museum kindly housed me). So we were right in the heart of Houdini-Catalina land to watch Houdini's best film.

With the change of venue and it being a Friday, I wasn't sure how big of an audience we would draw. But as showtime neared, the hall filled to standing room only! This is the second time this month I've watched The Grim Game sell out a house. It may have taken 100 years, but Houdini seems to have finally become a movie star.

I kicked things off with a short talk about Houdini and the rediscovery and restoration of the film. Then the great Micheal Mortilla spoke briefly before sitting down at the piano and providing magnificent musical accompaniment to the film (which he improvises). The movie played like gangbusters. The audience applauded Houdini's first appearance and all his escapes. In fact, just the appearance of a straitjacket brought on applause. They also laughed at the movie's humor (the maid is always a favorite), and gasped at the plane crash, possibly the biggest reaction I've yet heard to this moment.

A special attendee was magician Lee Terbosic, who came all the way from Pittsburgh for the event. You may recall that in 2016 Lee recreated Houdini's suspended straitjacket escape in Pittsburgh on the 100th anniversary of that feat, and this year he starred with George Hardeen in Houdini's Last Secrets. Lee came with his charming girlfriend, Jessie Marie, and after the screening, we all went to dinner where Lee shared with me the backstory of his straitjacket escape as well as some of his awesome Houdini ideas for the future. (UPDATE: Looks like Lee also used this weekend to propose to Jessie!!!)

Also on hand was Joe Notaro whose own accounts of the event you can read HERE. Of course, Joe and I had to make a pre-screening pilgrimage to the former site of the Hotel St. Catherine where Houdini stayed, and to what the museum is advocating naming "Houdini Point."

Speaking of the museum, I was excited to see their new Houdini display, which is now part of their permanent exhibition on Catalina history. It's a perfect encapsulation of Houdini's Catalina Terror Island experience. It also includes the long lost overboard box escape footage running on a continuous video loop. This footage is not in the movie and not available to see anywhere else, so just another reason to visit Catalina.


The following day was the annual Silent Film Benefit in the breathtaking Avalon Casino (where last year they screened Terror Island). There was nothing Houdini related on this day, but this year's movie, Why Be Good? (1929), starring Colleen Moore, was an absolute delight. Micheal Mortilla and his seven piece Accompanists outdid themselves with an all original score and received a standing ovation.

I was also honored to meet and get to know Silent Film Historian Joe Yranski, who spoke about Colleen Moore before the screening. Joe is a fountain of information on silent and early film and I so enjoyed our conversations and learning about Colleen Moore (who Joe knew personally). Joe also told me he had a hand in the Kino Houdini DVD set, but somehow we never got around to talking about that!

Next year's movie will be Blood and Sand starring Rudolph Valentino and two Houdini leading ladies, Lila Lee and Nita Naldi. Hey, maybe the museum would consider a Friday screening of Terror Island as it will be that movie's 100th Anniversary next year?

But even if Houdini cedes next year to Rudy, our great friend Julie Perlin Lee, director of the Catalina Island Museum, said she believes all aspects of Houdini's career could be of interest to museum goers. So I'm thinking we might indeed see more of Houdini on the Magic Isle.

Special thanks to Kellie Costello of the Catalina Island Museum for all her help in arranging my trip and stay.