Where I met a man who saw Houdini 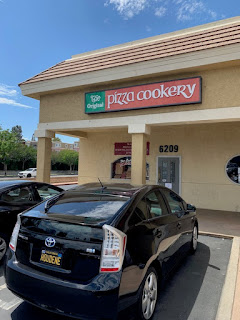 Today is the last day of business for The Pizza Cookery in Woodland Hills. Happily, their wonderful food will live on as they are just moving to a new location (landlord would not renew their lease). But they've been in this same spot for 44 years, which is pretty unique for Southern California, and this restaurant means a lot to me personally. Not only have I been going to it for all those 44 years, but it's located down the street from my High School, my first job, my first apartment. Every phase of my life I've stopped in for some pizza, salad, and their famous garlic rolls. But I have one memory in particular that will be of interest to WAH readers. This is where I met a man who saw Houdini.

It was April 1980, I was 15, and I had appeared in a local paper called the Chronicle ("Teen is wild about Houdini"). Somehow a gentlemen was able to get my contact details and got in touch. He said he had seen Houdini and could tell me about it. My mother feared this was a ploy to kidnap me, but my father thought this sounded intriguing, so he made arrangements for us to have lunch at The Pizza Cookery.

When we arrived, my father made a big deal of it. I recall him telling the restaurant staff this was "a historic meeting." The elderly gentleman arrived and he was very nice (not a kidnapper). The heart breaker is I didn't take any notes, so I don't know his name, nor the city or year he saw Houdini. But for some reason Cincinnati sticks in my head.

Over lunch, he said he vividly remembered Houdini doing the Water Torture Cell, which was a very exciting thing to hear. Of course, I wanted eyewitness details. I asked him what Houdini's voice sounded like (this was before I had heard it). I also wanted to know what the posters in the lobby looked like. Unfortunately, he said he couldn't remember these things. In fact, the Water Torture Cell was really the only standout memory he had. I recall being utterly perplexed how one could not remember every detail of an experience like this. But I often think of this gentleman now when I try to remember seeing Doug Henning in the 1980s. My memories are frighteningly dim! Heck, I'm struggling just to remember this lunch. Memories fade, kids, always take notes.

Anyway, our lunch continued and my father enjoyed talking to the man about the rest of his life, his memories of World War II, etc., which interested me less at that age. It really wasn't until later in life that I fully appreciated this experience. I've only met one other "witness" (Marie Blood). Now with Houdini dead 93 years, the possibility of meeting anyone with a clear living memory of him is almost nil. So I realize how lucky I was to meet this man, and what a very kind and generous thing it was for him to make the effort to find me and share his memory. He gave me a memory that I will never forget.

As for The Pizza Cookery, their new location will be in Thousand Oaks (follow their Facebook and Twitter). Who knows, maybe one day I will have lunch there with a young Doug Henning enthusiast and I can share with him what it was like to see the great magician. I just hope he doesn't ask me about the posters! 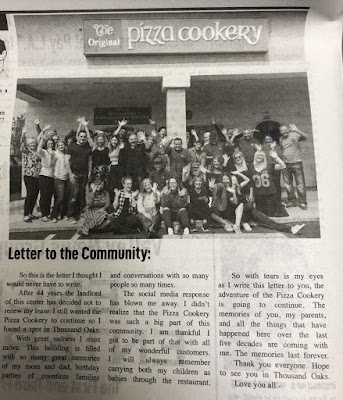