I'm off to Catalina "Terror" Island for the Catalina Island Museum's 100th Anniversary screening of The Grim Game and Silent Film Benefit. The location of the screening has been moved to Overlook Hall at 209 East Whittley in Avalon. The hall was built in 1929 and is adjacent to the Hotel Catalina where the Terror Island crew stayed in 1919 (and where I will be staying). Looks like a prefect venue for this screening.

I may not have time to update the blog while I'm away, so I thought I'd leave you with this Grim Game gem from my collection. I bought this original lobby card in the late 1970s from Larry Edmunds Bookshop on Hollywood Blvd for $75. That seemed like a lot back then. It's now hard to believe there was ever a time you could buy a Houdini treasure like this over the counter. (A Grim Game title lobby card recently sold at auction for $5,500.) 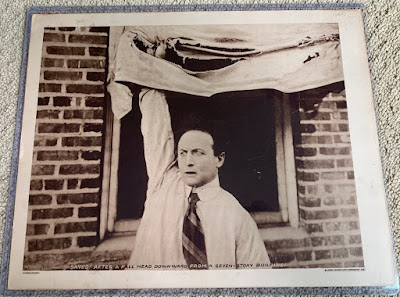 Hope to see you on Catalina!