Houdini sells out in Sierra Madre 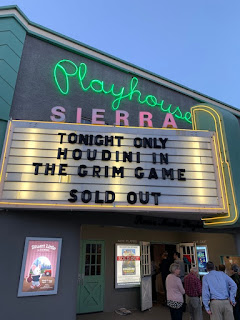 He's been dead 92 years, but that doesn't mean Houdini can't still pack a house! Friday's screening of The Grim Game at the Sierra Madre Playhouse in Sierra Madre, California, was sold out and a big success.

The Playhouse, which opened in 1923 as a silent movie theater called the "Wistaria Theater", was nicely decked out with Houdini posters. I arrived early for a run-through and had great fun "helping" (meaning I stood and watched) the Playhouse's technical director, Todd McCraw, put up the theater marquee. The instructions said to just put up the name of the movie, but Todd and I agreed that "HOUDINI" had to be up there as well!

Every seat was filled and the evening kicked off at 8pm emceed by Playhouse president David Gordon. I came up first to introduce the movie and tell the story of its rediscovery and restoration. Kevin Liebson of the Catalina Island Museum, who co-sponsored the event, spoke about the museum's upcoming Silent Movie Benefit. Playhouse artistic director Christian Lebano then revealed plans to launch a series of classic film events at the Sierra Madre Playhouse.

Then came the movie with live accompaniment on the piano by the gifted Michael Mortilla. You may recall Michael provided music for last year's Silent Movie Benefit screening of Terror Island. He also provided the score for the original Bill McIlhany VHS release of The Master Mystery (which makes that version a must have). Michael's music was once again masterful. After the screening there was a Q&A panel with some great questions from the audience. The Houdini lobby posters were then raffled off.

I was thrilled by how many audience members commented on just how much they enjoyed the movie as a movie (not just a novelty). Many marveled at how surprisingly well made it was. There were even compliments on Houdini's acting! (I also spotted something new in the movie, which I plan to share in an upcoming post.)

It's a shame The Grim Game remains commercially unavailable because it really is the best representation of Houdini's film work. But that's what makes screenings like this one at the Sierra Madre Playhouse so special. What a treat it was to be part of this. My thanks to all.

Below are a few more pics for the evening.


The Grim Game will screen again at the Catalina Island Museum on Friday, May 17th. I will once again introduce the film (same jokes folks) and it will again be accompanied by Michael Mortilla. Click for details and tickets.