Is that Julie Karcher in The Grim Game?

While enjoying The Grim Game at the Sierra Madre Playhouse last Friday, I spotted something--or rather, someone--I've never seen before. When Houdini/Harvey Hanford is being arrested and wrestled into a police car, among the bystanders is a woman who appears to be Julie Karcher. 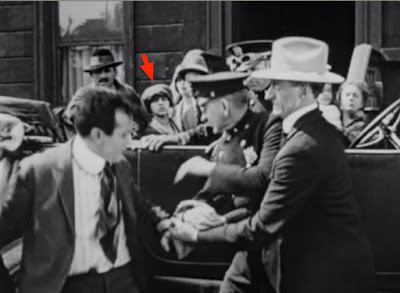 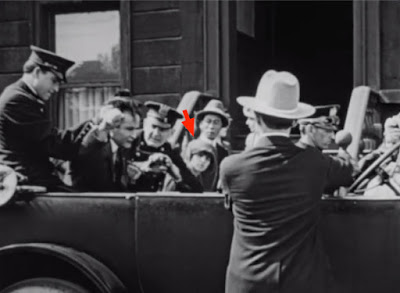 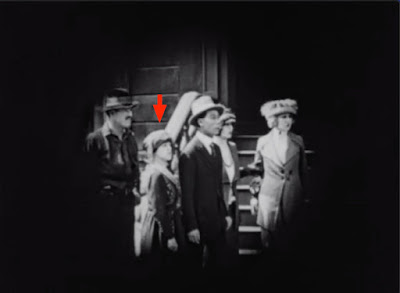 Julie Karcher was a fixture in the Houdinis lives. She can be spotted in many photos, and when the Houdinis has their first lunch with Sir Arthur and Lady Conan Doyle in England, it's recorded that Julie was there as well. According to Marie Blood, Bess and "Aunt Julie" knew each other from school days. She was Bess's "companion abroad and on shopping expeditions" as well as the Houdinis housekeeper (she lived in 278). As with the rest of the family, she was fluent in German. She later joined Houdini's 3 Shows and One as an assistant and helped Bess make the costumes.

Julie did accompany the Houdinis to Hollywood for the making of The Grim Game and Terror Island, so I think it's entirely possible she got a little cameo in the film. The woman in the film has her same jaw line and she's very small in stature, just as Julie was (smaller than Bess, in fact). Alas, no Bess in sight.

So what do we think? Is the woman in The Grim Game the ever present Julie K?


After Houdini's death, Julie remained by Bess's side. In 1927 she moved with Bess and the family into 67 Payson Ave. But after Bess met Ed Saint and moved to Florida in 1932, Julie seems to vanish from her life. According to Marie Blood, she went to live with Julia Sawyer's mother. I'm not sure what ever become of her. But as she was intimately involved with the Houdinis for so many years, what an amazing interview subject she would have been!

UPDATE: Just a little update on the relationship of Julie to the Houdinis. In a 1920 letter to Sir Arthur Conan Doyle, Houdini refers to Julie as Bess's "cousin."