A collection of six terrific original Houdini press photos from various Chicago newspaper and sports archives sold yesterday on eBay for a collective $1,225. I knew these were going to draw attention, and I wasn't wrong.

Among the photos are three shots (below) that I've never seen. One is a nice portrait (sold for $152.49), the other a shot of Houdini demonstrating spirit trumpet trickery ($256.99), and the last one is a remarkable shot of Houdini with assistants Julie Karcher and Julia Sawyer ($222.50). This is a fantastic image of Houdini as a magician that has never been published, and what I especially love is that Houdini is dressed in shirtsleeves, suggesting this was maybe taken during rehearsals.

Another thing I find intriguing about some of these shots is the stamp on the back from Houdini's roadshow (below). This tells me that these pictures might have been sent to the papers by Houdini himself. 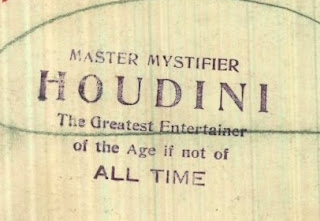