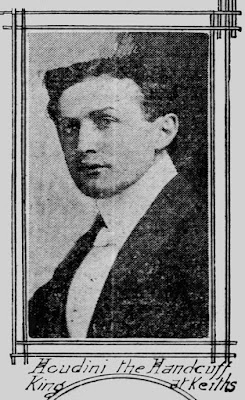 While Houdini boasted of his American success at the end of 1905, the truth was he was still competing with a sea of Handcuff Kings, some of whom were better known in the U.S. at this time. But all that was about to change.

Houdini began the year in Washington D.C. On New Year's Day he escaped from a jail cell at the 10th Precinct Station. A few days later he made an escape at the 5th Precinct, passing through six locked doors in 31 minutes. However, the newspapers reported that the jailer had found a "needle" on the floor which he believed Houdini used to pick the lock.

Houdini was then challenged by Warden J.H. Harris to "try his art" at the United States Jail. Houdini arrived on January 6, and, after being strip searched, was locked inside cell No. 2 on Murderers Row, famous for having housed Charles J. Guiteau, the assassin of President James Garfield. In 21 minutes Houdini was not only free, but he had opened all the cell doors and switched all the prisoners from cell to cell.

The combination of the U.S. Jail, the Guiteau cell, and the prisoner exchange proved irresistible to reporters. The story of the escape went national, instantly setting Houdini apart from his imitators. With this bold and creative escape, Houdini had captured the country's imagination.

Houdini went on to play three weeks in Philadelphia, escaping from a jail cell on January 8. He was then challenged by Louis V. Wolf to escape custom made handcuffs weighing 15 pounds. Houdini freed himself after a 45 minute struggle. He took out an ad proclaiming: "Philadelphia has never seen such excitement since the Declaration of Independence has been signed." But a truer indication of his growing fame might have been the appearance of Frank Dumont's popular burlesque at the 11th Street Opera House, "Hoo-Done-Ett."

At the end of February Houdini opened at Keith's Theater in Boston. He had done well in Boston during his first tour under Martin Beck in 1899. Now with news of his D.C. jail break still fresh, the city was primed for his return. He proved to be a sensation.

Houdini kicked off his Boston engagement with a challenge escape from a locked and roped close-woven wicker hamper. The escapes took 62 minutes and Houdini told reporters it was "the hardest of all his tests." He then performed for students at Harvard Union who tied him up in 60 feet of rope. Free in 12 minutes, the students "fought for pieces of rope as souvenirs." Philip Broomfield and Co. challenged him to escape from a "Witch's Chair" (a.k.a. Tramp Chair), an ordeal that took one hour and twenty-four minutes. Another challenge saw him "suspended in mid-air" on the Keith's stage, but the exact nature of the restraint is unknown. 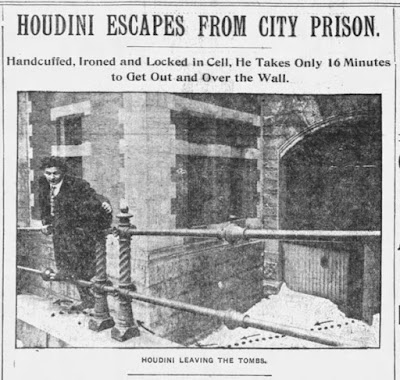 On March 19, Houdini broke out of the City Jail on Somerset Street, known as The Tombs (today the John Adams Courthouse). Finding no prisoners available to swap in their cells, he decided to escape from the facility itself and call the astonished warden from the theater. Reporters persuaded Houdini to return and take a photo scaling the prison wall. The escape and photo made the front page of the Boston Globe.

It was also in Boston that Houdini screened what appears to have been his first film, Houdini Defeats Hackenschmidt. The content remains a mystery, but the theater management deemed it merely "fair." Houdini also found time to published his first book, The Right Way to Do Wrong: An Exposé of Successful Criminals. The book included a chapter called "Fake! Fake! Fake!" which called out bogus faith healers and spirit mediums. Houdini writes:

“Spiritualism has many followers, and at one time I was almost a believer, but this was before I made a thorough investigation, which I have followed up even to the present day. I have never seen a materialization or a manifestation which I cannot fully explain.”


On his 32nd birthday, Houdini was presented on stage with a flowered wreath styled as a giant pair of handcuffs and a $1000 Tiffany pocket watch by the appreciative Keith's manager, H. D. Dupee. Houdini's Boston engagement ran a record breaking eight weeks.

Houdini then took an unusual step. He partnered with Whitman Osgood, who had helped with the publication of The Right Way to Do Wrong, and formed his own traveling roadshow on the Stair & Havlin circuit. The show featured the mentalist team of Julius and Agnes Zancig; The Kita Banza Troupe (Japanese acrobats); Miss Anna Chandler (monologist); The Altheat Twins (song and dance); and comedians Louise Carver and Eugenie Pollard. Houdini was the headliner with his challenges and Prison Cell & Barrel Mystery.

"Houdini & His Own Company" opened on April 16 at the Salem Theater in Salem, Massachusetts. To promote the show Houdini escaped from a jail cell at the Front Street police station. (A historical note; it was during this Salem run that the great San Francisco earthquake and fire occurred.) After three days, the troupe moved on to Hartford, Connecticut, where Houdini beat a packing case made by Wise, Smith & Co.


Blaney's Theater in Newark and a jail break from police headquarters followed. During the week, a female escape artist, Sirronge, played in opposition to Houdini at Procotor's Newark. ("She is said to be good," reported Variety.) The first week of May found the company at the Auditorium Theater in Baltimore. Then it was to New York for engagements at the American Theater and the West End Theater. 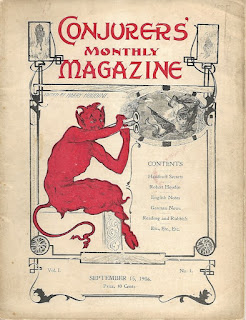 Houdini took the summer months off. In August he visited Appleton where he politely declined to escape from the Outagamie jail, proclaiming it escape-proof. He also used the time to ready his own magic journal, Conjurers' Monthly Magazine, the first issue of which would appear on September 15, 1906.

Having idolized Robert-Houdin as a boy, Houdini's research and experiences with the Houdin's contemporaries across Europe had changed his mind about the master. Now in his magazine he began a regular series, "Unknown Facts Concerning Robert-Houdin", making the case that the great magician was not the inventor he claimed to be. In this first issue Houdini recounted the "discourteous" treatment he received at the hands of Madame Robert-Houdin in 1902, a slight that appears to have festered. Hardeen also penned a monthly column for the magazine as the "Official European Correspondent."

Although Houdini said he would return with his roadshow in the Fall, he instead signed a new contract with B.F. Keith's for a tour that kicked off with two weeks at Keith & Proctor's in Union Square. New York remained a tough town for Houdini to win over. A jail break in Yorkville went wrong when a pick was discovered during his examination. Dr. A.M. Wilson, editor of The Sphinx, who no doubt resented Houdini's upstart magic magazine, reprinted the unflattering story in full, fanning a feud that would rage between the two men for the next decade.

It was then back to Chase's "Polite Vaudeville" in Washington where over the course of three weeks Houdini faced a new challenge everyday. His tests included "the most difficult handcuffs ever used to challenge him"; a sealed paper bag (which he would escape without tearing the paper); and a screw-fastened zinc-lined piano case. The latter escape took 57 minutes with Houdini emerging from his cabinet exactly at midnight. At every matinee he freed himself from a straitjacket.

Engagements in Pittsburgh, Cincinnati, Buffalo and Toronto followed. After a jail break in Cincinnati he received a glowing testimonial from the Chief of Police: "Exhibitions of a similar character have been given at these Headquarters, but never so complete and artistic. Mr. Houdini is a wonder in this line." He then returned to his old haunt, Chicago, escaping from a jail cell at Andy Rohan's Central Police Station.

Having targeted imitators on his return to the U.S., Houdini now found himself a target, with an assortment of doctored handcuffs being brought onstage by confederates. Houdini made it a practice of showing the audience exactly how the cuffs had been rigged to defeat him. He then said if they would allow him extra time, he would attempt the escape anyway.

At the Temple Theater in Detroit on the evening of November 26, Houdini struggled in one such cuff for an hour and a half. Bess left the stage in tears before he finally freed himself. The next day the Detroit Free Press had some fun with the drama, writing it up as, "Houdini's Horror, or The Tampered Handcuff, a Sketch in One Shackle."

Looking to promote his Detroit engagement, Houdini visited the Wayne County Jail. Concluding it was "too strong and too perfectly locked for any man to get out without a confederate," he announced that he would instead leap handcuffed from the Belle Isle Bridge and free himself underwater. Houdini had teased such a feat on occasion, but it's unclear if he had ever actually made a public "bridge jump" before Detroit.

Despite the cold weather, on November 27 Houdini made his way to the bridge accompanied by Franz Kukol. After scribbling his Will on the back of an envelope--"I give it all to Bess"--he was manacled with "two of the best and most modern handcuffs" and tethered with a 113 foot safety line. He then jumped. The shock of the freezing water stunned him, but he freed himself and swam to a nearby rowboat. The stunt drew a front page story in The Detroit News. Over time, it also became famously mythologized.

The Belle Isle Bridge jump marked a major evolution in Houdini's career. Until now the stakes were humiliation and loss of reputation should he fail to make an escape. But now the stakes were raised. When Houdini emerged from the Detroit River that day, he had been baptized as a death defier.


December found Houdini at Cook Opera House in Rochester and the Valentine Theater in Toledo. He then closed out the year with a three week run at Keith's New Theater in Philadelphia.

In many ways, all the years leading up to 1906 can be seen as contributing to the overall creation of Houdini. But at the end of 1906, he emerges as the complete showman. Peerless escape artist, author, historian, skeptic, death defier, sensation of Europe and America. Houdini had arrived and would reign for the next 20 years.