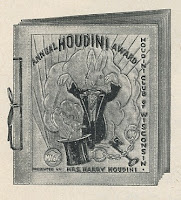 The Houdini Club of Wisconsin must rank right up there with the S.A.M. and IBM as one the oldest fraternal magic organizations. The club's roots go back to 1915, but the club as it still exists today was founded on May 28, 1938. Yes, today marks its 74th Anniversary!

The stated purpose of the Houdini Club of Wisconsin "is to promote magic and it's kindred arts to the highest degree and to perpetuate the name of Harry Houdini." My kind of club.

Earlier this month I had the pleasure of meeting Julie Sobanski, president of the Houdini Club of Wisconsin, at the Magic Collectors Weekend in Chicago. Julie shared with me the story of the club's own "Houdini Award."

Designed by Edward Saint, the Houdini Award is a hand-tooled, engraved leather bound book containing pictures of Houdini and a letter to the club from Bess. It was first presented by Bessie herself to Ben Bergor for his "Original Combination Trunk and Straitjacket Escape and Substitution" during the club's third convention in 1940. After winning the award at two more consecutive conventions, the award became Bergor's to keep. After his death in 1981 the award was donated by his family to the Wisconsin Historical Society where it resides today (it can be viewed by special request).

Julie wrote a nice article about the club and the Houdini Award in the August 2011 issue or MUM. Now she has generously allowed me to share these wonderful rare photos of Bessie presenting the Houdini Award to Ben Bergor at the 1941 convention (I've added copyright on their behalf). 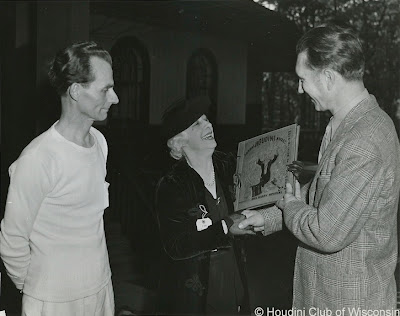 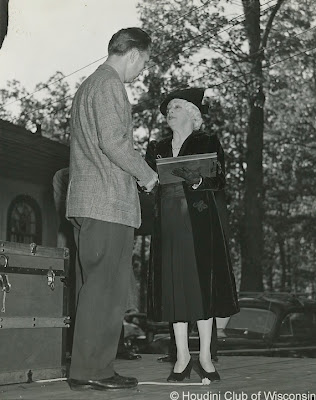 Thanks again to Julie Sobanski for sharing these pics. And a very happy 74th Anniversary to the Houdini Club of Wisconsin! Bessie would be proud to know that it's still going strong.
Written by John Cox at 7:38 AM