'American Immigration During Houdini's Day' at the JMM, Sunday

This Sunday, August 19, Dr. Nicholas Fessenden will give a talk on "American Immigration During Houdini's Day, 1878-1924" at The Jewish Museum of Maryland. Below are details. 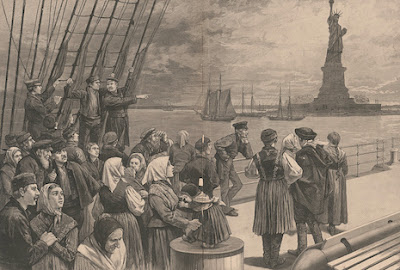 Ehrich Weiss (who would become the great Harry Houdini) landed in New York with his family in 1878 at the tender age of four, part of a wave of mass immigration that would expand to over 24 million new arrivals to the shores of American by 1914.

The beginning of this wave originated largely from Germany, Ireland, Scandinavia, and Britain, but as industrialization spurred prosperity in western Europe in the 1890s, the bulk of immigrants began arriving from Italy and eastern Europe.

Join us as Dr. Nicholas Fessenden explores the impact this wave of immigration had on the United States and its immigration policies – particularly the birth of a restrictionist movement and Congressional quotas that lasted from the 1920s to the 1960s.


The Jewish Museum of Maryland's exhibition Inescapable: The Life and Legacy of Harry Houdini runs through January 21, 2019. For more information and a full list of events (including my own talk on Nov. 4), visit their website.