The Houdini seance inside Room 401 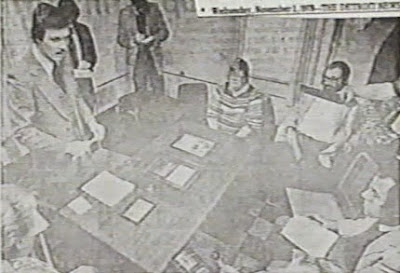 It wasn't an "official" Houdini seance, but in 1978 four researchers led by Mark McPherson gathered for a Halloween seance at what must go down as the best location of them all; the very room in which Houdini died! The article below from the The San Bernardino County Sun describes the seance inside Room 401 of Grace Hospital.


As the article states, this was a year before Grace Hospital was scheduled to be torn down, so it's likely this section of the hospital was already closed and offered the investigators a unique one-time opportunity to hold a seance in the infamous Room 401 (Corridor D). But what about the claim that contact was made?

In 1997, seance organizer Mark McPherson wrote and hosted a Houdini documentary called The Houdini File which aired on local Michigan television. In it, he offered a few more specifics about the 1978 seance.

McPherson said the team of mediums reached Houdini via a "trunk call" to Harry Price and Sir Arthur Conan Doyle. The ghost of Houdini claimed that "direct voice communication" had been difficult for him, and that at the time of his death, he had been working on an effect having to do with "bilocation." Houdini also claimed he had been a reincarnated soul (hmmm) and that he would incarnate again through the child of a family member. When asked what he thought of the entire seance proceedings, the ghost of Houdini is said to have replied: "Misagosh!"

Now if we could only see more photos of this seance and get a last good look inside Room 401. Are you out there, Mr. McPherson?

Thanks to Jon Oliver for providing me with a copy of The Houdini File.