No doubt you've heard that David Bowie, one of the great iconic rock stars of all time, died yesterday at the age of 69. Bowie had been battling cancer and is reported to have died peacefully at home. So is there a Houdini connection to the Starman? Why yes there is. 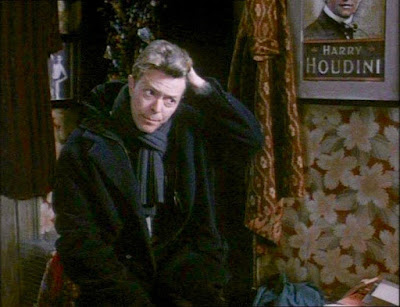 In 1991, Bowie starred opposite Rosanna Arquette in The Linguini Incident. In the movie, Arquette plays an aspiring magician and escape artist who collects Houdini artifacts and comes into possession of "Madame Houdini's" wedding ring. While waiting for her big break, she works as a waitress at a Manhattan restaurant where Bowie tries to get her to marry him so he can get his green card.

It's a decent film loaded with Houdini references and a nice water tank escape at the end. In some territories it was called Houdini & Company.

David Bowie also played Nikola Tesla in the 2006 film The Prestige, one the best magic films ever.

Below is the trailer for The Linguini Incident.

You can read David Bowie's obituary at The New York Times.
Written by John Cox at 12:44 PM