Houdini and the Transatlantic Flight 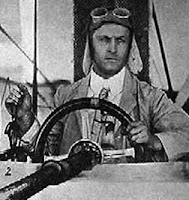 In 1910 Houdini became the first man to fly a plane in Australia. This put Houdini's name into the historical record of early aviation, but the feat is largely forgotten by the general public today. Now, thanks to an intriguing clipping in The Culliton Papers, we have evidence that Houdini considered a dramatic return to aviation in 1920 in a feat that could have cemented him as one of the greatest aviators of all time.

On June 19, 1920, a news flash appeared in the Los Angeles Times stating that Houdini was planning to make a transatlantic flight from Paris to New York. This is fundamentally the same flight (in reverse) that, seven years later, would make Charles Lindbergh the most famous man alive. And here's Houdini talking about doing it in 1920!

Under the headline HOUDINI TO FLY, the paper says news about the flight has come from "no less authority than Houdini himself", who at the time was staying in the Grand Hotel in Scotland. The plan was for Houdini to depart London by air on June 27 for Paris. On July 2 he would fly from Paris to Cherbourg. Then, on July 3, he would depart Cherbourg "and cross the Atlantic for New York City."

The report continues: "He doesn't say say how long he expects the trip to take, nor who is accompanying him. However, he does say that he expects to rest three months after he reaches home, before he begins work in pictures or anywhere else."

Unfortunately, the article doesn't say what kind of a plane Houdini planned to use.

Transatlantic crossings were big news at the time. In June of 1919, British aviators John Alcock and Arthur Brown had made the first non-stop transatlantic flight in a modified World War I Vickers Vimy bomber. Winston Churchill presented them with a prize for the first crossing of the Atlantic Ocean in "less than 72 consecutive hours" and they were knighted by King George V.

How serious was Houdini about this flight? It's hard to say. This was during a time when Houdini was downplaying his role as magician and escape artist in favor a new identity as all around man of action and adventure (a better way to tie into his movie career). Just a year before he had announced plans to wrestle a live shark. But the fact that he had a time table suggests this might have been more than an idle boast.

However, transatlantic flights where quite dangerous back then. Alcock and Brown's flight nearly ended in disaster several times owing to engine trouble, fog, snow and ice. Houdini would have needed to be highly skilled aviator to pull it off, or he would have needed an experienced pilot to accompany him. Maybe it was this realization that led him to abandon the idea and return to America by ship, where he entertained the passengers as, "Houdini The World Famous Cinema Star."

But what a chapter it would have been in the Houdini story had he made his Transatlantic Flight.