Water Torture Cell used in 'The Great Houdinis' up for auction 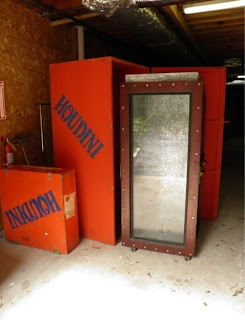 The Water Torture Cell used in the ABC TV movie, The Great Houdinis, is up for auction on eBay with a starting price of $6,500. The cell comes from the collection of magician and past President of the International Brotherhood of Magicians, Abb Dickson, who provided the escape apparatuses for the 1976 movie. It is also mentioned in the Doug Henning biography, Spellbound. Henning came to Atlanta to examine the cell (and its secret) when he was preparing to do the feat on his first TV special.

Looking at the seller's photos on eBay, the cell at first appears to be different than the one used in the film. However, I believe this is because the production dressed up the cell with a false metal frame on front, maybe to give it a more dramatic look or because it would photograph better.* If you look at the sides of the cell, the interior, and especially the stocks, it is clearly the same cell. It's also pretty well documented that the cell used in the film was the Abb Dickson cell, which some media even claimed to be an original Houdini cell (it isn't).


It will be exciting to see what happens with this great piece of magic and movie memorabilia. Check out the auction (#260841901287) on eBay.

Click here for a detailed look back at the Making of The Great Houdinis.

*UPDATE: Gay Blackstone, who served as Sally Struthers' stunt double and magic coach on the film, has confirmed that a false metal front was indeed added to the cell to balance the lighting during filming.
Written by John Cox at 10:14 AM