The Houdini Exposure will tour UK in Spring 2012 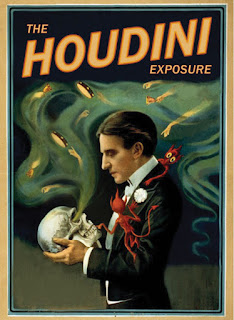 Following two sell-out preview performances in October 2009 at the Arena Theatre in Wolverhampton, Little Earthquake, a UK based theatre company, is preparing for a national tour of The Houdini Exposure in Spring 2012.

The Houdini Exposure addresses the question of whether or not it is possible to make contact with the spirits of the dead. The production explores subjective interpretations of mediumship and psychic phenomena through two parallel storylines, featuring Little Earthquake’s trademark combination of factual research with elements of pure fiction.

Check out the trailer above. For more information on the play and tour visit the Little Earthquake/Houdini Exposure website. (And, yes, that's an image of Thurston they are using on their poster.)

UPDATE: Oops. Looking closely at the Little Earthquake website, I see there's an update dated July 27 that says: "We have just received news that our recent funding application to the Wellcome Trust has been unsuccessful. This funding was required to prepare and present The Houdini Exposure on a national tour throughout Spring and Autumn 2012. Whilst disappointed by this news, we’ll now take stock and look for alternative ways in which to successfully present the production next year."
Written by John Cox at 7:57 AM