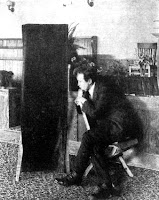 Patrick Culliton has posted on his website, Houdini's Ghost, two pages on "The Psychic Phenomena that Houdini Couldn't Explain" -- this being the mysterious streak of light that appeared in a photo he took at the First Spiritualist Temple in Los Angeles on April 11, 1923. It includes some terrific photos, newspaper accounts, and Houdini's own written testimonial about exactly what happened that day.

This isn't one of the more well-known episodes in Houdini's career, but Patrick has always had a keen interest in it, having recently discovered the location of church, which still stands today. He also has a suspicion that the entire thing might have been engineered by Houdini himself. But if so, how did he do it?

Click on the headline to have a read at Houdini's Ghost (and make sure you click to page two via the link at the bottom of the page).
Written by John Cox at 1:08 PM