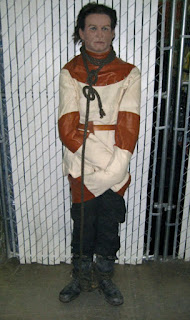 A life-size Houdini mannequin wearing a straitjacket is currently listed on eBay with an opening bid price of $2,700.00. The seller doesn't have any history on this, but he says the face made of a rubber material and the hair is "punched in."

From the looks and description, this appears to be a professionally made prop, right down to what the seller says are vintage clothes and boats. I suspect it was used to show Houdini suspended in the jacket -- it looks to me like the rope that is now wrapped around his neck was originally used as the suspension line.

But what could this be from? As with the coffin that cycled a while back, could this turn out to be a prop from Ragtime? Or did it come from another Houdini stage or screen project? The face sculpt appears to be Houdini himself, not an actor, so we don't have any clues there.

I doubt the seller is going to get anywhere near his price without some information where this came from. So does anyone recognize this fella? Who are you, Houdini?

Thanks to Kevin Connolly at Houdini Himself for the find.

"It's a figure sculpted by a guy from Niagara Falls and was displayed in the Ripley's Museum in Orlando. An exact replica was used in the Water Torture display at the Houdini Magical Hall of Fame (and was destroyed in the fire) and a copy also was/is displayed in the Louis Tussaud's Waxworks (also in Niagara)."