Identity of Erdnase to be revealed? 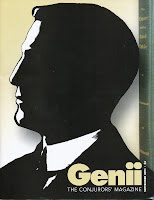 There is a great deal of buzz in the magic world today as word is the September issue of Genii Magazine, which will be released tomorrow, will finally unmask the true identity of "S. W. Erdnase".

Erdanse (a pseudonym) wrote The Expert at the Card Table

, a book detailing sleight of hand and cheating techniques using playing cards, which has been in continual publication since 1902. Erdnase's true identity is one of the enduring mysteries of the magic community.

Wouldn't it be wild if Erdnase turned out to be Houdini? He was the "King of Cards" after all. Also, according to Joe Pecore at the Genii Forum, "The Erdnase Change", a color change described in Expert at the Card Table, is the same handling originally credited to Houdini in Selbit's The Magician's Handbook (1901), and later in Elliott's Last Legacy (1923). Hmmm...
Written by John Cox at 6:07 PM