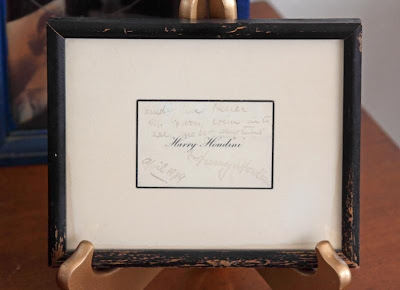 A signed Houdini calling card is one of several magic related items being auctioned as part of a massive estate sale of actor Tony Curtis' personal memorabilia. The auction will take place on September 17, 2011, at Julien's Auctions in Beverly Hills. Previews start Sept 6.

This card is petty darn cool. Not only was it owned by Tony Curtis, but remarkable is the fact that Houdini mentions Harry Cohn. Cohn, who would later run Columbia Pictures and became one of Hollywood's major moguls, was just starting out in the movie business in 1919. According to Wikipedia, he and his brother Jack had just founded CBC Film Sales Corporation. The initials stood for Cohn, Brandt, and Cohn, but Hollywood wags noted the company's low-budget, low-class efforts and nicknamed CBC "Corned Beef and Cabbage." CBC would eventually become Columbia Pictures.

Ironically, as Columbia head, Cohn would reject doing a Houdini biopic at his studio, complaining that it was "lacking in romance and needed a better ending than a punch in the solar plexus." Paramount would be the studio to finally tackle Houdini's story in a 1953 film which starred, of course, Tony Curtis.

Thanks to Bill Mullins at the Genii Forum for the tip.
Written by John Cox at 10:28 AM