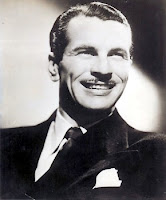 Magician and actor John Calvert has turned 100 years old. Calvert knew Bess Houdini and Edward Saint when they lived in Hollywood in the 1930s. When Bess saw Calvert's show, she is reported to have said, "Calvert plays the part of a magician better than any actor I have ever seen, except for Harry, of course."

At the time, Bess and Ed Saint were actively trying to set up a Houdini biopic at one of the major studios. Bess sent a letter to Calvert, who had a seven year contract with Columbia, saying, "In my opinion, you are the only actor capable of portraying the life of my late husband, Harry Houdini. Are you interested?"

Calvert would later go on to produce and star in a special "Tribute to Houdini" stage show, which was released on what is now a very collectible VHS. But did Calvert ever meet or see Houdini himself? If so, this would make him possibly the last living link to Houdini (as we lost Dorothy Young in March). Unfortunately, recent interviews with Calvert ask him about Thurston and Blackstone, but not our Harry.

You can hear an interview with John Calvert and watch a video of his 100th birthday celebration at The Magic Newswire.
Written by John Cox at 4:37 PM