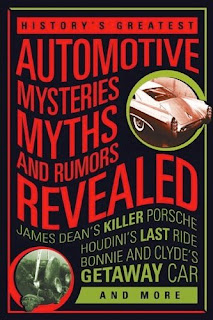 Check out this new book, History's Greatest Automotive Mysteries, Myths, and Rumors Revealed by Matt Stone and Preston Lerner. It makes reference to "Houdini's Last Ride" on the cover and, according to the description on Amazon, includes this nugget of info:

Did you know Harry Houdini learned to drive late in life only because he needed to get to an airport for a stunt, and it was the only drive that he ever made?


While the book doesn't come out until December, so I don't know exactly what this refers to, I suspect they are talking about Houdini's trip to Australia in 1910 when he did indeed use an automobile to get to the field at Diggers Rest where he made his historic first flight. There's even film of him doing so. And it has been said that this is when Houdini first learned to drive.

However, we now know that's not true. Houdini purchased a Humber automobile in England in 1904. We know that for a fact from a newspaper blurb which I posted here and followed up on with the good folks at the Humber Register (nailing down the exact specs of this car was a WILD ABOUT HARRY "exclusive"). There's even a reference to Houdini competing in an auto race at the time.

So it seems the authors (or at least the Amazon blurb) have it reversed. Houdini learned to drive not "late in life", but when he was in his 20s and could afford a car. It was later in life that he stopped driving. According to Marie Blood, Harry and Bess always used a chauffeur in the 1920s. But it is possible the Australian auto could have been the last car he drove himself -- his "last ride."

Regardless, it's always fun to see Houdini pop up in books like this, even if it's more myth-making than "revealing."

History's Greatest Automotive Mysteries, Myths, and Rumors Revealed comes out in December and can be pre-ordered on Amazon.com.

UPDATE: Houdini bumped for Nascar's Fastest Monkey?
Written by John Cox at 11:42 AM