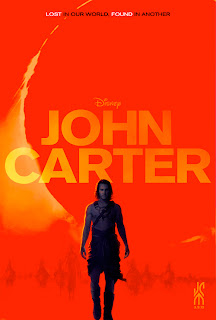 John Carter, Disney's big budget adaptation of Edgar Rice Burroughs' seminal sci-fi classic, A Princess of Mars, hits theaters today. I've seen the film and I think it's pretty darn good! I also now have a mad crush on Dejah Thoris. But what the heck does this have to do with Houdini, you ask?

Well, if you stay through the credits and have eagle eyes, you'll notice a credit for "Lead Houdini TDs" near the end.

This refers to the Houdini 3D animation software developed by Side Effects, which has been used on many big budget Hollywood films, and helped the company win an Oscar for Scientific and Technical Achievement. On March 1st Side Effects released the latest version of the software, Houdini 12.

Looks like Houdini made it big in the movies after all!

For those who understand this kind of stuff, here is a video explaining the advances in Houdini 12. I just like that they say "Houdini" over and over.